I find it difficult to take a race seriously which is focused on promoting chocolate .  However, the RAM racing series made a real effort this year to make this a serious race.  The updates for this year included a new course thru the city streets and a corral system to put the faster runners in a better position to well, run fast.  If you want to run fast then you don’t want to be on an overcrowded lake front path with 500 other people who are all attempting to squeeze thru two water-stop tables “together”.  As soon as I saw the updated course map, I knew this would be a great race for me and a few friends because 1) it would be serious enough for me and  2) it would be fun enough for them.  This was a win/win situation in my opinion:  chocolate, fun and good racing!

The pre-race is all about getting  into position so that you can check your gear and get into the corrals on time.  Most races I run are very formal and I’ve learned the hard lesson that if you aren’t there early, you may be starting at the back!  Here are the ladies who were available for the pre-race group photo….Me, Gail R., Michelle N., Marti, Trisha D., and Nicki T. 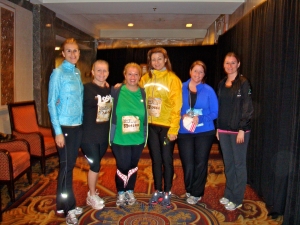 After the group photo, we separated and dashed over to Grant Park.   I was immediately impressed with the number of volunteers standing around asking runners if they needed help.  In fact, one of these nice people pointed us toward gear check.  I had two 5K runners with me and their gear check was in a different location than the 15K but they also started the race before me so it wasn’t a problem to get their gear checked and get them to the start before I even had to think about my race.  My only complaint for the pre-race has nothing to do with RAM Racing or the Hot Chocolate Race itself but the poor conditions of Grant Park, which is still recovering from the destruction caused during the Lollapalooza Festival in early August.  Many areas of the park have been closed off since Lollapalooza but it appears they are trying to reopen it.  I would  hazard a guess that this was the first event, in this area of Grant Park since Lollapalooza.  The grassy areas were very SATURATED with water and mud.  There was “some” grass but definitely more mud and water.  In fact, people kept asking if it had rained the previous night.  RAM Racing did  attempt to combat the problem by putting down plywood to walk to/from 5K gear check but short of covering the entire field, it was useless.  I have gotten less muddy on soggy trail runs than I did just getting these ladies thru the 5K gear check.  Oh well, not the fault of race officials.  So we are off to the 5K start!  Photo Op for Nicki T. and I at the drop off. 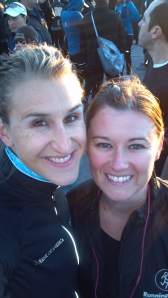 Gear check and the start were in close proximity, there were loads of volunteers to direct us, the port-o-pots where plentiful and things were seemingly organized and running on schedule.  However, due to unforseen circumstances, the race start had to be delayed due to a semi truck getting stuck under one of the overpasses on the race route.  The delay was approximately 15-20 minutes while emergency personnel attempted to clear the situation.  When they did start the 5K runners it was with a revised route to avoid the problem area and that also elongated their race.  In my opinion, there aren’t many good reasons to delay the start of a race  but this was beyond their control.

The 15K gear check was not nearly as muddy, I dropped my gear and left to figure out where I needed to be for my corral.   The volunteers were a little confused at this point as to where I should be going since the 5K was still in staging, and they sent me in a general direction to search out a green sign.   I apparently messed it up but instead found my way close to the start and a “green sign” with my corral letter.  Then I saw the 15K runners start to move up and realized I wasn’t in the correct spot but fortunately, since it was loosely organized at this point, I was able to just jump in with the “B” corral, or what was supposed to be the “B” corral.  I noticed that we had a few extras as I saw several “O” people, a few “A”s, and lots of “C”s.    I was told by other runners that things were confusing and nobody really knew where they were supposed to be, so some just jumped in line when they saw the runners start to move into staging.  I wasn’t real concerned at this point though as I was so close to the start, I knew it wasn’t going to make much of a difference.

Once the gun went off, we all had to squeeze thru the start banner to cross the timing mat, which only covered half of the street.  I initially thought  it would be a problem but it went smoothly and we were off and running very quickly.  Even though I saw walkers as soon as I passed the start line, they never really interfered with the majority of runners and everyone around me seemed to be running a good pace, regardless of the letter on their bib.  It wasn’t overcrowed and I really was able to run as fast as I wanted without too much traffic interference for most of the race.  Of course, it was busy thru the aid stations and on turns but other than that it went well.  Although I didn’t use any of the aid stations, it appeared that there was both water and Gatorade on both sides of the street in multiple places throughout the course.  I saw several spots for port-o-pots but was fortunate enough not to need one!  I did hear the potty lines were long but other than the marathon, I have always had an issue with lines at the on course potty locations.  All in all, I think it was a good race!  I think they did a good job with the updated course and am sure they will continue to improve the race in future years.  My goal was to run 1:15 and I was on target all the way thru, even toward the end until I hit the Roosevelt Bridge, which EVERY race in Chicago runs so I was expecting it.  Well, I basically clawed my way up that bridge on my hands and knees…..it wasn’t pretty….can’t wait for those photos!  So the bridge took me out.  Congratulations Roosevelt Bridge, you claimed another victim.  I finished in 1:16:40 but was happy with the effort .

Post-Race, big thumbs up to the Ghirardelli Chocolate!  Very tasty!  They gave us hot chocolate and a chocolate fondue plate with a 1/2 banana, pretzel rod, 3 apple slices, 1 medium marshmallow and I may be missing something but not much.  It was very good but thankfully I had already ingested my AdvoCare Post Workout Recovery drink and a bagel that I had brought from home or I would have been starved and probably getting the shakes from not taking in enough calories.  I always bring what I need for my own recovery because I don’t  trust anyone to have what I need to recover properly.  After a hard run/workout  you need a  4:1 carb to protein ratio to properly recover and since I don’t like to count calories or numbers at all, I always do the Advocare Post Workout Recovery drink so I am sure to get what I need without worrying about how to make it happen.  I strongly encourage you to always take what you need to a race in terms of your own fuel and recovery products.  Don’t count on the race to have it for you.  You need to get in the recovery product within one hour of when you finish, faster if you can, then you can have some fun……which is exactly what Nicki T, myself and Kristina H. did after the race!

Note to self……avoid the port-o-pot back drop for the next photo.

I’d definitely run this race again.  It was fun, I thought the course was good, the corrals worked for me and I think it will just keep getting better.  And any day that I can get out of the house and spend some time with my girls, plus run a good race is a WIN for me.  So I guess I’m in and I WILL RUN FOR CHOCOLATE!

“Run”way Fashion….let’s just say I had a whole lot of wardrobe malfunction going on during the race….Brooks Glycerin Diva Running Jacket was super cute and I’ve worn it for non-running purposes multiple times and love it but it kept riding up while I was running!  I also had on my Alo TooTallFritz.com shirt that RaceExpressions.com did for me and the jacket basically kept  grabbing the shirt and pulling that up too!  Then on the bottom, I opted out of wearing the CW-X Compression 3/4 tights and instead chose the SkirtSports Under the Skirt Capri Pants because they are soft, awesome feeling, and have pockets but apparently I need to downsize because they kept slipping and felt like they were falling down until I was about half way  thru the race and apparently my sweat kicked in to hold them in place.  These are really awesome pants, just don’t think I will race in them again unless I get a smaller size.

Did you race this weekend?  How was it?  Would you run a theme race like the Hot Chocolate, the Monster, or the Rock N Roll races, or do you avoid them like the plague for being too commercial?  I’d love to hear your thoughts!