As I drove away from the Running For Kicks fun run last night, I was so giddy, I felt like a kid at Christmas.  The excitement lasted the entire 45 minute ride home and thru the remainder of the evening.  I was totally high off the run.  I actually wondered if the feeling was the “runners high” that people talk about but I’m quite certain I have never personally experienced.  The reason does not matter, just let it suffice to say this was the most “fun” I have had on a run in a very, very long time.  And that’s saying quite a bit because I actually like to run and find it enjoyable most of the time.

The fun run participants were so numberous, many didn’t even make the picture but here are the ones who bothered to stand still for the 2 seconds for Gail to snap the photo.  I’m in the back, just right of middle in the red shirt with the HUGE reflective log in the middle.

Good to know that the reflectivity of my Athleta Hopkinton Top is no joke.  Don’t say that you didn’t see me coming!

After the group photo, most of these people took off in a sprint but the F’N Running Club people were awaiting the arrival of MagMileRunner (Maggie) so this gave me an opportunity to grab a few photos.  Me & Gail….yes, I often cut myself off.  I  need a photog class. 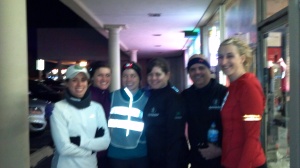 Then Maggie arrived and we were off and running.  Apparently we ran thru “the hills” of Ishnala but it was dark and so much fun that I didn’t realize there were many hills.  I did notice an occasional downhill because of the downward momentum.  Not sure if we ran up those hills or not.  We might possibly have been running faster than some might consider fun and I secretly knew that I was sabotaging today’s speed workout but I was having so much fun it was hard to  care.  On the miles where my watch beeped and I knew we didn’t have “many” stops, we were right between 8:40 and 8:44.  Take that Ishnala!

One might say the RFK runners invaded the Ishnala subdivision in a similar manner as to how children invade a neighborhood at Halloween.  There were runners EVERYWHERE.  Most of the runners had blinking lights and/or reflective wear.  Even though it was dark, we were very visible and you could see runners at almost every intersection.  None of us really knew the route so there was a lot of running, stopping, and jumping on the back of a passing group.  Then we would pass our “leaders” just to get to an new intersection and again stop to “discuss” the route and/or await an approaching group for direction.  It was quite an adventure and so much fun!  I’m so happy that I finally made it  out for a RFK Fun Run!

When we returned to the store, we were greeted by the smell of chili with all the fixings .  The Mizuno Rep was also in the house and brought shoes for everyone to try during their fun run, then they raffled off 2 pair of shoes!  No, I didn’t win but I was hoping I would!  Here is a look at the store with everyone eating and awaiting the raffle:

I encourage you to make it a point to get to Running For Kicks for one of these awesome group runs.  There were paces from walk, run/walk to really fast people.   Monday nights at 6pm, rain or shine!