I’m a tough chik.  I’ve known that for a long time.  As with all ladies, some days are better than others but overall, I’m up there on the tough scale.  Over the last couple years, I became aware of a clothing company appropriately named, Tough Chik.  How fun is that?  I had browsed their website multiple times but their products just weren’t exactly what I wanted at the time.  They had lots of cute running tees but I don’t wear tees while running, or otherwise, and the performance line was small so I have been patiently waiting for them to expand the line.    I don’t mind spending money on performance clothing but I don’t spend it on stuff that I don’t love.

Towards the end of last year, my beloved Tough Chiks, who I been stalking but had yet to make a single purchase, announced they would be organizing a team for 2012.  Anyone who joined the team, by purchasing from the Team apparel line, would not only be part of the inaugural Team Tough Chik but also have a year’s worth of discounts for all Tough Chik apparel, get discounts for numberous  sponsors, and possibly get a ton of random freebies in our team package.  So basically we were purchasing a mystery package and well, I’m all about surprises and taking a chance, especially when the Team Tough Chik package looked to be just my style in regards to performance, function and fashion. 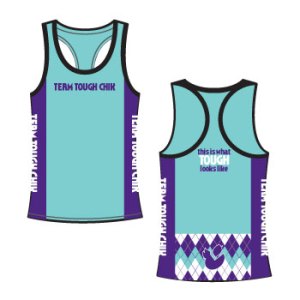 The team packages will be mailed sometime in March so I have been anticipating the delivery for several months.  Then I saw that the TC performance line started to expand and I was intrigued.  I’ve had my eye on this:

But I didn’t buy it.  I thought it was cute but I didn’t know how the sizing would work, I have this team package coming and the contents might not fit , so I was waiting to see how the sizing of the team gear would work for my body.  I have an odd body shape.  I’m long and lean but have a very poochy belly .  As a result, I have to be careful with my clothing not being too tight thru the belly or I look ridiculous.  I know you will be shocked but I also have an issue with my height and some of the TRI and running tops are too short and I certainly won’t wear anything that doesn’t have proper coverage so I was still waiting.  I figured that after the team package arrived and I had a better idea on sizing that I would try a few other things, like the pink tank above.

However, Tough Chik pulled a fast one and put something out that I COULD.NOT.RESIST.  Many of you know that my favorite race is the Shamrock Shuffle in Chicago.  Each year, I try to  encourage as many of my friends as possible to run.  This year I even pursuaded a large group of ladies to run with me in green Team Sparkle skirts.  And since the occasion will be so festive, I have also purchased shamrock socks, white leggings for under the skirt and a green pullover.  But this green “i run” tank will match the Shamrock outfit perfectly: 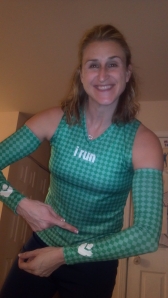 Yep, I couldn’t resist but took the plunge and purchased my first TC product.  It was relatively cheap at $30, plus there was an option of matching arm sleeves which I will probably need at the Shamrock Shuffle.  And most importantly, it fit PERFECTLY.   The tank is designed to be form-fitting thru the chest and then has a drop to a looser fit thru the mommy tummy.  YAY!  WIN!  I was so excited last night when I tried it on that I couldn’t even contain my excitement but took some pics, posted them on Facebook, tried to get 3 of these in the PINK (above) for me and my girls running 13.1 Miami on Sunday….. but shocker……. they are sold out of the pink in some sizes…..more to come soon! 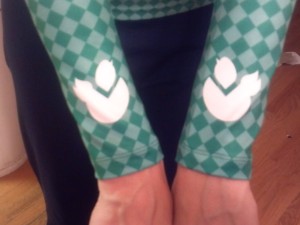 I can not wait to run in this top.  The fit is so nice, it was hard to take it off.  The seams are flat and the arm holes go up high enough that I don’t anticipate any chafing in the underarm flab department, this really seems like the perfect top and let’s say that I have been thru a “few” brands to know a lot by just the initial try-on.  Most tops I order never make it to a trial run but just get sent back immediately.  I have never found any running tops that I really love but am very hopeful with this one.  And quite honestly, the price point is so low compared to other technical brands, that I’m hoping this top performs half as good as I expect.  You may only see me on the trail in Tough Chik i run tanks this summer.  I’ll take this tank to Miami for a test drive this weekend and let you know how it performs.  More later.

Do you have any running tops/tanks that you absolutely love?  What is the price range?  Let’s find some good stuff at a good price !  Tell us what you like!