Where to start?  So much to say.  So much I shouldn’t say.  Let’s just start at the beginning.  Great trip into the city with my friends.  Traffic was non-existent, we parked and had plenty of time to meet up with some F’N Runners pre-race.  From back left:  John, Dawn, Melissa, Me, Nicki, Pam.  Bottom left:  Kathy, Cathie, Sue, & Melanie.

We had a great group who managed to make it to the race early enough for a photo!  We took the pic then headed to gear check.  Everything went smoothly, gear check was well marked and easy to find, the volunteers were cold but very cheerful and welcoming.  Then we said our goodbyes and headed for our corrals.  Nicki, Myself & Pam outside of gear check.

I was assigned to Corral A after a decent run at last year’s 15K race but it was looking a little “intense” up there and well, I’m not even close to 100% so I opted to slide back into Corral B with Kelly (Running Kellometers) and Sierra (Posh Meets Pavement).  It was good because we shivered together chatted and awaited the start.  Corral A went off at 7am, then each of the subsequent corrals went off 3 minutes and 30 seconds later.  There were 20 corrals.  Therefore it took over 70 minutes (possibly longer) to get all the corrals thru the start.  Then they had a walking event.

When Corral B took off, it was a good start.  I was in a good spot, not running too fast or slow.  The course was not the full downtown tour that we experienced last year but the 5K did stick to the streets.  However, the course led us down by the lake and onto a narrow entrance ramp. Traffic was tight even up in Corral B and there were several points where I was jammed up and not able to get around  slower runners as the course turned and/or narrowed.  I didn’t experience this on last year’s course so was a bit surprised but not upset.  It happens although not very often in Corral B.  Plus, we had walkers.  Yes, walkers.  The walkers who managed to somehow start in front of us.  Where did these walkers start, in Corral A?  Maybe they ran the first half mile then decided to walk the rest?  I’m not really sure and don’t want to waste any energy trying to figure that one out but that too was a bit of a surprise.

Other than a few tight turns and the one narrow entrance ramp, I actually liked the course.  The 5K course was always in close proximity to the start/finish area.  We saw other runners at a few points on course.  Then we looped back past the start line and we were able to see all the runners who were still awaiting the start of their race.  This 5K course (below in blue) was spectator friendly too!

I finished in 24:25.  I was thinking I might be able to pull off a sub 24 but Mount Roosevelt, as some affectionately call the Roosevelt Bridge, did a number on me and took some of the wind from my sails.  So I was happy with the result and I felt strong most of the way.

As soon as I hit the finish I could still see all the runners who were still waiting to start.  My friend Nicki was in Corral P, so I just kept running thru the finish area, back to the start to see if I could get a glimpse of her and waive her off.  However, once I got up there, I realized that many of my fast 5K friends were back in line for another run of the course.  In fact, I was even cajoled by a group of 6 of them telling me to get back in line and run it again!  Now, I know this is not very ethical and normally something I wouldn’t even consider but the whole entire process was such a sham that it seemed like a good idea at the time.   I thought I was being “slick” by pulling a timing strip off the back of my bib, so as not to confuse the timing system, but alas this bib had 2 timing strips!  As I got back in line with Nicki and subsequently ran the race again with her, I overwrote my first 5K time……even though I only had one timing strip.  Oooops!

But the race with Nicki was absolutely worth it!  I had so much fun and loved experiencing the race from her point of view.  I didn’t use any water on the course the first time, or the second time.  I swear I didn’t hold anyone up in Corral P who wanted to run faster.  I really didn’t affect anyone else’s race by running a second time other than Nicki’s.  It was fun but dang was it crowded by that point!  There were a ton of walkers.  We were constantly weaving in and out of run/walkers.  Plus the course was so congested because of said walkers that the little exit ramp that had previously slowed me down was now at an absolute standstill.  Several people around us just stopped running while commenting that they could walk faster.  Funny!  But everyone was in good spirits and Nicki and I just plugged along with me burning her ear with stories and non-stop chatter.  SO.MUCH.FUN.

Once we finished, we mingled with the other runners and were waiting for a few friends.  One man I know ran the 5K, then removed BOTH of his timing strips and proceeded to run the 15K.  He did all this as RAM Racing was meticulously starting corrals at 3 min and 30 second intervals.  Good theory which turned poor in practice and resulted in a lot of people waiting out in the cold for a very long time. Some of us could have ran the race 2 or three times, and we did.  Ethical?  Absolutely not but it was just about fun and/or running our training miles.  Plus we were waiting for friends for so long that we had to do something besides just stand around in the cold. We are RUNNERS.  So we ran.  The roads were open, we took advantage of the situation.

The after race party was packed but fun.

The chocolate was way up in that white tent.  The lines were a bit crazy but it went fast and the mug of goodies was amazing.  This  photo was posted to the Hot Chocolate Facebook page.  Thankfully, someone managed to get a photo of the goodies!  Banana, Apple Slices, pretzels, marshmallow, rice crispy treat & a full cup of hot chocolate.  Yum! 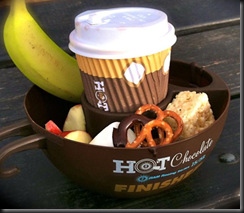 So I had fun!  I’ve never seen so many adults walking around with chocolate smeared on their faces, clothes and hands.  I loved the experience of running the race (x2).  I would love for Ram Racing to get it together so I can do this race again, at some point in the future.  However, I won’t be running the Hot Chocolate in 2013 and honestly, quite possibly never again.  There are so many really great races and I’m going to go to the most well ran, easiest, fun race around.  Races that support and respect my run friends and myself.  Races that fully acknowledge that we have choices and then proceed accordingly.  Races that know that its a PITA for the runners to pick up packets and then make it as easy as possible for us to slide in an out of a packet-up pick up location with our kids in tow.  Races that know how many people they can safely accommodate and limit the registration numbers to what THEY can manage.

All in all, I had fun but I’m a firm believer that if you don’t have fun, it’s your own fault.  We came, we ran, we ate chocolate.  Now onto the next thing…..