I took all of 2014 off cycling due to the sudden move from IL to IN.  The stress of finding a new house while packing up the IL home.  All while working full time.  Being a full time mom with a hubby who had pretty much already moved ahead of us for work.   And let’s not even talk about how crazy long it took to complete the move itself.    I basically didn’t do much last year other than run to maintain sanity, then try not to lose my mind while I wasn’t running ….. and I didn’t even do that very well.  Regardless, since last August, I’ve been running on my country roads here in rural Indiana.   Should be boring, right?

Wrong.  I’ve had a couple close calls where I was almost struck by unaware motorists.  One time a lady was so close to me that I could have reached into her car and touched her child who was riding passenger.   Did she see me?  Probably not.  Was the sun in her eyes?  Maybe.  Or was she trying to teach me a lesson to “get off the road”.  Possibly.

As a result, I was a bit worried about getting my bike out.  In fact, I was scared.   While running, I’m legally obligated to run facing oncoming vehicular traffic.  While cycling, I’m legally obligated to ride with vehicular traffic.  Blind to what is coming behind me.  Blind to the fact that someone may be unaware that I’m on the road.  On a bike.  Vulnerable.  At His mercy.  If it weren’t for my love of triathlon; I’d probably have left my bike on the trainer again for 2015.  But I’m signed up for Ironman 70.3 Steelhead.  And I must ride.  Outside.  On the road.  In the wind.  Up and down whatever hills I can find.  Alone. 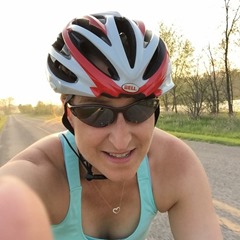 All of a sudden, I remember how much I love cycling.  How much I love my bike.  How great it is to fly down the hills.  How horrid it is to struggle UP the hills.  How freeing it is to be able to ride for hours on end to parts unknown.  On one of my recent rides, I went looking for something that I had read about, in a small town near my home.  A covered bridge.  Indiana is known for it’s old covered bridges (98 in all) but I had no idea that one was so close to my new home.  The Spencerville Covered Bridge was built in 1873 and it’s a mere 11 miles from my house!

A hidden historic treasure.  Basically in my backyard.  One that not many locals think about since traffic has long been rerouted away from the bridge to protect it from overuse, modern vehicles and big massive semi trucks that have previously damaged this old girl.   Now she just sits awaiting our arrival.  While I was there multiple people pulled up and snapped pics.   One couple even lingered, looking at this piece of modern day history, walking the interior planks.  There is a small parking area on the east side of the bridge for those who want to do more than just drive by.  If you are in the area, go check it out!

I’m thankful to be back on the bike.  I’ve been trying to ride more and run less.  Easier said than done for this runner.  But I’m enjoying the journey.  Enjoying my bike and the wind in my hair.  I love finding hidden treasures like the Spencerville Covered Bridge.  I enjoy riding new roads and finding new routes, particularly if there are a couple hills on which I can practice climbing and shifting.

** Get Out and Find YOUR Local Hidden Treasurers!  ** Amanda – TooTallFritz