I  work in a high-rise building in downtown Chicago.  I  normally arrive in the early  morning and leave mid afternoon. It’s unusual that I leave the building during the day for “lunch” and in this office space, I no longer have a personal office, nor do I have access to a window unless I specifically seek one out.  So when I plan to run after work, I do so without regard to the weather.  And generally speaking,  my life really doesn’t have many time allowances to reschedule runs/workouts anyhow, so the weather is hardly a factor in my decision to run or not run.

So yesterday afternoon, as I was  working, I started to notice my Wednesday night runners begin to drop like flies.  We normally have a pretty solid core group that shows up to run with the F’N Running Club, but yesterday we were a little light.  My run friends had awesome alibis.  Brain P was packing for Ireland.  Yeah right, like men actually pack their own bags?  HaHaHaHa…..ok, maybe some men.  Melissa EM was getting a massage?  Hmmmmm, yeah, me too.  I want a massage.  Can I join you?  Jenni H & Meg couldn’t come cuz hubby wasn’t home to help with the little ones.  Okay, that one “might” have been legit but it was ironic that once I stepped outside the fluorescent lights I realized the weather was  less than ideal. It looked something like this (not my photo but couldn’t get the source). 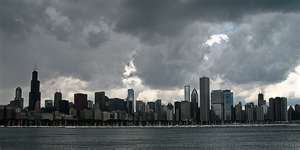 By the time I drove all the way back to the Burbs in a cold, drizzly rain, even I didn’t really want to run .  But alas, I hauled myself out of my car and just started running because although it was cold and wet, I knew that I REALLY did want to be out there putting in some miles.  The gloominess was actually peaceful.  There was a bit of ice and snow left on Old Plank east of Frankfort and the wildlife was out thinking they had the world all to themselves.   I saw several white tail deer, rabbits, birds, squirrels and other small animals.  It was as close to a real trail run as I’ve had for quite a while.  Quiet.  Peaceful.  Majestic.

And since I wasn’t the only one who wanted to run, we still had a nice group of F’N Runners.  Top from left:  CrazyBoyDon, Diane & Maggie – MagMileRunner.  Bottom from left:  Dawn, Cathie, Susan & Me.  Brian F was nice enough to take this photo.  Thanks, Brian!

Another great run!  Thanks to those of you who came out because I am not sure I would have been strong enough to go by myself if we hadn’t planned to meet up as a group.  It was just one of those days where you start out and you just aren’t feeling it but as always, I think we were all happy as we were driving home.

A special shout out goes to Don for coming out in the rain.  His schedule usually doesn’t allow him to make an appearance on weeknights and it was great to see him, although he did push our pace a bit.  CrazyBoy is getting strong….P-90X, maybe?  Gotta check that out!