It has been 1309 days since my last real bike ride and you probably think that I have been missing it. And you’d be wrong. People laugh when I say that I swim to TRI or I ride to TRI. They really don’t understand that the other two disciplines which I practice are done only so that I can toe the line in a Triathlon. I swim and bike so that I appreciate the run more. When I swim, I pray to my Lord & Savior to get me out of the water safely and onto the bike. When I am on the bike I am begging to be delivered to my running shoes. Then WHY do I TRI? I do it for the “fun“, for the challenge, and so that I will put my running shoes on a pedestal from which they will never tumble. I LOVE TO RUN. I AM A RUNNER.

So the bike shop laughed when they saw my brand new bike from 2007. I put some serious miles on it in 2008 training for a 70.3 but as soon as the race was over, it went on the trainer and has not come off until its trip to the bike shop yesterday. Why, you may ask? I was trying for Mr. Michael and soon after that 70.3, I got lucky and conceived. I am a restricted activity preggo woman who is allowed to walk. Nothing else, walk. As if you don’t think a normal pregnancy is not an , now think of a preggo runner who is not allowed to jostle her little package, at all. I was told I could walk. I asked if I could elliptical and I was told, NO.  “NO! No marathons for you. You can walk. You can only walk!”……Now go back and repeat that quote in a Japanese accent. It almost isn’t the same if you can’t hear the words in the Japanese accent of my 5 foot tall OBGYN. I could walk, I could only walk. Okay, I walked and ate. The two things didn’t go real well together. By now you have probably figured out that what goes into the body has to be somewhat countered by your activity level and your calorie burn. It wasn’t pretty but I had a beautiful baby boy so it was ALL worth it!

On September 7, 2009 my bouncing baby boy arrived 366 days after that 70.3 in 2008. Lots of extra things going on with him so it took me a bit to get back to the run. 2010 & 2011 focused just on  the run and now 2012 brings Triathlon back to me. One way or another, I’m going back to triathlon. I have already registered for two 70.3s this year. You may think it would have been wise to get back on the bike PRIOR to registering for a few races but that would be self-defeating. I knew I wouldn’t get back on the bike without the TRIs already on the schedule. So today was Day 1 of TTF on the bike. All I can say is OUCH. The first 13 miles with the wind at my back was awesome. Cold but awesome. The 2nd 13 miles was good because I was on the trail and I saw lots of my run friends, some of whom were doing their 20-22 milers today for the Illinois Marathon on April 28th. The last 13 miles sucked. Really sucked. Uphill into the wind sucked with tired legs, a sore upper body and a pain in the neck and shoulders. Sucked. Now I am totally wiped out, mad at the bike, and hoping I bounce back so I can get a good run in tomorrow morning.

My number one thought on the bike: I’D RATHER BE RUNNING!!! What do you think about while you ride? 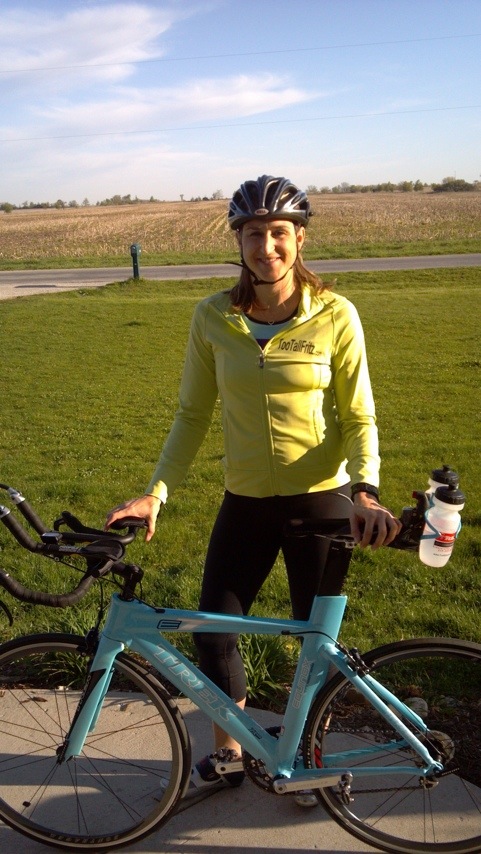