Maggie – MagMileRunner, has been doing a series of photo challenges. This week the challenge surrounds race medals, awards and memorabilia. I can’t say that I am sentimental , and race awards/medals are no different. When I walk in the door after a race , the first thing that happens is the kids attack me for my goodies. Aby is usually wearing my race shirt before I unpack my bag, Michael is wearing my medal or has put it around the neck of one of the dogs, and the memorabilia becomes lost to me sooner rather than later. No big deal. I run for me, not the awards, not the medals. I think the “goodies” are a nice touch but not something I need.

So today, I went on a quest to find a few of my medals. After I trip over them a couple times, I eventually pick them up and there are a few default locations in which I started to look.

The stair banister is a favorite spot to hang them once I find them:

Or the box in the basement, which I packed up a couple of years ago when we were trying to sell the house:

We tripped over this one in the playroom as we were looking around for more: 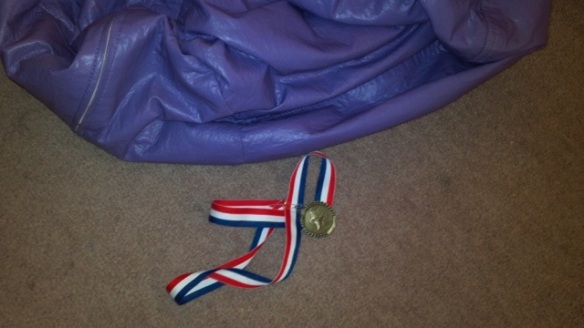 Aby saw these trophies while I was photographing the lonely medal on the floor.

Then we went up to her room and immediately saw my 2010 Chicago Marathon medal hanging on her dresser and a few in a basket where she throws her shoes & belts:

And just as I was grabbing my purse to run out the door, I saw this lonely guy sitting on top of the breadbox. 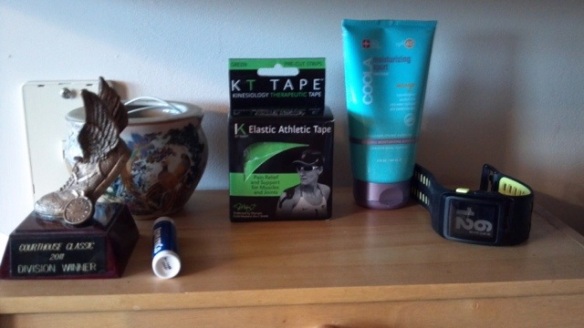 So I know this is more than “one” photo but I am constantly asked what I do with all my stuff and I never have a good answer. It’s not that I don’t respect the races, the awards or memorbilia, just that I’m at a point in my life where nothing is mine. I don’t go to the bathroom alone, rarely shower or bathe solo, I always have a toddler sleeping on chest or his little feet in my face. Aby borrows what she wants and I’m constantly “losing” MY stuff. So no need to get all worked up about where to put memorabilia as it would just disappear sooner or later anyhow. And I’m totally okay with that just as long as the kiddos leave my gps watch alone.

What do you do with your race medals/awards and memorabilia. I’m pretty sure you must have a better system than me. 🙂

13 thoughts on “What Do You Do With Medals/Awards?”