Although, I’ve grown up with dogs and currently have 3 dogs residing in my home, I’ve never had one sprayed by a skunk.  Until Monday.  I didn’t know what to do about it.  It was 4am and I may not have been thinking quite clearly.

I awoke to the smell of burning, almost like burnt rubber.  Hubby and I cruised the house looking for something which may have been melting/smoking.   Nothing.  The smell followed us from room to room, along with our weimaraner, Libby. 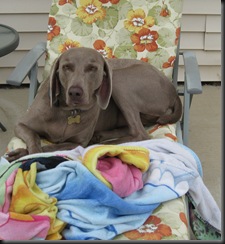 Hubby says, “I think it’s the dog”.  It was then that I realized we were dealing with a skunk spray.  The smell was changing to more of a skunky smell verses the burning smell.  Plus she kept flopping down rubbing her face on the carpet, etc.  I took Libby outside at 4am and gave her a bath.  I thought the smell would pass.  15  hours later when I got home from work and a night with the kids at the local big top circus, the house smelled so badly I could hardly stand it.  Judy F was kind enough to give me the magic formula for deskunking.  I thought you might like to know, maybe you already have a deskunking kit on hand but in case you don’t, you will need:  one bottle of peroxide, half a box of baking soda & 1 TBS of Dawn dish soap.   Wearing rubber gloves, mix contents in a bucket, rub onto dog (avoiding eyes & mouth), let sit for 15 minutes, rinse & bathe dog.

This eliminated about 95% of the smell and I was extremely pleased!  While we were at it, the other dogs got a bath too.  I was slightly irritated with them that they didn’t not attempt to stop Libby from getting into trouble with the skunk.  As a family, a pack ,or a group of friends, I believe you have a social responsibility to look out for one another and attempt to influence others in a positive manner and dissuade bad behavior.  Did you ever get in trouble because you didn’t stop a sibling from making a bad judgment call?  Yep, me too.  Libby’s canine siblings didn’t get off the hook either.  They should have attempted to stop Libby rather than egging her on and then laughing at the results.  Social responsibility, even in a pack.  That’s my theory and I’m sticking too it.   Baths all around!

Since everyone was nice and clean, I asked them to sit for a  photo.  This was their response, which I interpret as “you can make us sit but we don’t have to be happy about it.  And don’t even THINK that we are going to look at your stupid camera!”     Libby,  Goose & Dakota below, 8 years old.

Then the family came in to help.  Almost everyone was looking this time.  Libby is apparently still mad and Michael just thought this was all hilarious so he was just giggling away at the situation.  Libby, Mick, Dakota, Aby, Goose & Michael.

We still had an issue with the smell inside the house.  It was bad enough to make my eyes water.  Of course, I couldn’t find anything at the store that Judy or others recommended to clear the indoor smell.  So this is what I used and it cleared the majority of the odor.  Citrus Magic solid upstairs and downstairs plus the entire house was heavily sprayed with the Renuzit Super Odor Neutralizer. 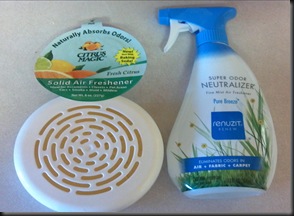 Thanks to everyone, particularly Judy F who I now have  on speed dial, for the suggestions on deskunking my dog and house.   For the record, several people told me that Skunk Off from the pet stores works really well too.   I hope you never have this problem but if you do hopefully this info will help you as well.