The time is here.  The time is now.  It is officially the time which Abby S. and I used to talk of and wonder about years ago when my baby girl wanted to start running “K-5s” with us.  Back then, my little Aby was probably 4 or 5 and I told her that she couldn’t run a 5K until she could actually say it correctly.  Big Abby and I  laughed and wondered how long it would take before little Aby would be faster than her mom.  I’m pretty sure we won’t need to be wondering for much longer.

While I was off rehabbing my foot this summer, my baby girl, who just turned 11 came into her own in the running realm.   She keeps asking, “Mom, am I faster than you now?”  I keep saying, “Yes”.  She says, “Because your hurt?”  I say, “Yes, because I’m hurt but you would be faster even if I were healthy”. 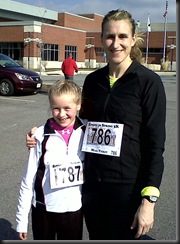 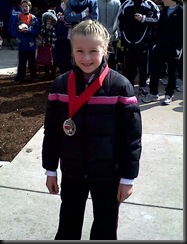 We’ve ran a lot of races since that day but one thing always holds true.  I always finish before her.  I don’t wait for her.  I have never ran a race “with” her and we don’t train together.  I run my race, she runs hers.  Some people think this is cruel but I think its real.  I can’t hold her hand when she races in school, so I don’t do it on the 5K course.  I always tell her to follow the crowd and she won’t get lost.  I finish, then go back for her.

Fast forward to this year.  She has gotten much stronger and faster.  I let her race the 5Ks that I pre-registered us for even though I had to sit them out due to injury.  She ran the Courthouse Classic (with Adella & her Hubby) with a good but not necessarily impressive time of 30:37, then the Short Run Long Day 5K (with the F’N Running Club) in 29:46.  Decent times but still in the “fun” zone. 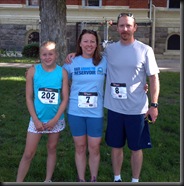 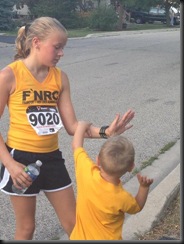 Then Cross Country season started and she decided that she was no longer running “for fun”.  She turned on the jets and became a 7:00 min/mile runner overnight.  JUST.LIKE.THAT. 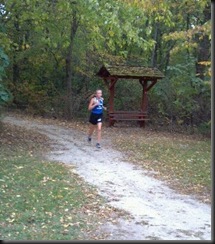 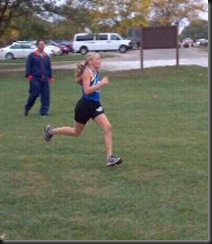 So this weekend we will run our first 5K together (Fallen Firefighters 5K Run in Bourbonnais, IL) under Aby’s new reign as the fastest runner in the house.  She asked me if she was going to beat me.  I said, yes.  Then I said, “but know that if you are in front of me, you better not slow down because I will be RUNNING.YOU.DOWN. every step of the way.  And I expect the same from you.  If I’m ahead, I will be running my ass off trying to keep you from catching me.”  I mean, that’s how everyone treats their 11 year old, right?

Now who’s the cat and who’s the mouse?  I’m not even sure at this point but it sure is a game and it’s officially starting this weekend. Let the fun begin!

What I do know is that Aby will most definitely beat me on Sunday.  I know that I am still recovering so not up to a realistic speed as of yet.  I know that my speed has a cap, even in a healthy state and hers does not.  I probably need to get used to looking at her back but I will always keep pressing and letting her know that I’ll be there if she waivers.  I can’t wait to see how this fall racing season shapes up.  Yesterday, a lady on the trail ran a PR for her 5K because we were trying to keep Aby in sight.  She was super excited.  Aby asks me on the way  home, “What’s my 5K PR?”.  I said, “I’ll tell you on Sunday”.

Feel free to come out and watch the showdown between Aby and I.  Or come run so that I have a shoulder to cry on when she totally kicks my ass.  Better yet, bring the cooler.  I like Corona Light. 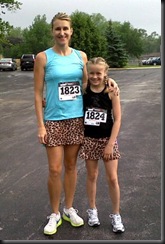