This is it, the week leading up to the Chicago Marathon. It’s a tad bittersweet this year.  I really LOVE the Chicago Marathon and this will probably be the last year that I’ll run it. When I signed up, 2014 was only a few months old and I had zero idea of what the year would bring for me and my family. I had high hopes for Chicago and planned to make it “my race”. I don’t often race the marathon but I had wanted to really put a lot into my training this year and see what I could do with it. I wanted not only a great race but one to remember. I know the city. I know the route. I know the fan support is off the charts. I know that I love the Chicago Marathon in a very special way. It’s my home town race, or at least it was ….. 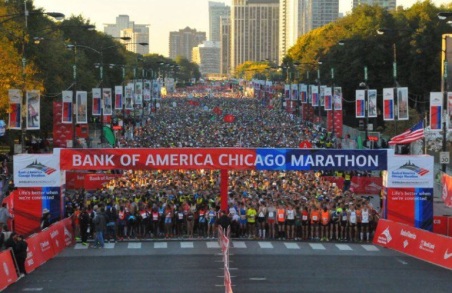 Now my home is 200 miles away from Chicago.  While I love my new hometown, the atmosphere is definitely “Small Town USA” verses a big bustling city. It certainly suits me and my family much better than our stint in IL but I do miss Chicago . So as I run the streets of Chicago on Sunday, I will be filled with mixed emotions as I bid farewell to the city and their beloved marathon.

Everyone keeps asking about my “goals”.  Well, my goal for this race has changed A LOT over the course of the summer and thru the lengthy moving process. I took “some” time off running to focus on  relocation.  I just started training at the end of August in an effort to salvage some of the fall marathon season. As a result, I am not strong and fast as I had previously hoped .  So I’ve moved from the “kill it” plan to the “finish it” plan.  And there you have it, my goal is to finish.

To be perfectly honest, I wouldn’t even be in “finish it” shape had it not been for a few long time friends who have selfishly helped me thru the long runs.  They’ve been there in the dark with me as I’ve muddled along trying to log miles, rebuild fitness and power up for Chicago. I am getting stronger and I owe a ton of thanks to those ladies and also my hubby for getting my treadmill in the house so I can log miles, even if broken into small chunks.  My mojo is returning, I can feel it!

So on Sunday, I do plan to #OWNCHICAGO.

So if you see me in Chicago this weekend, smile & wave!  I may be running. I may be walking. But one thing is for sure, I’ll be thankful to see a friendly face and you can be sure that I’ll be headed for the finish line!