Sunday, I ran my last Chicago Marathon.  Not sure I  can go out like that and leave it as my last one but only time will tell.  Aby does want to go back and run it when she turns 16 but that won’t be possible because she’ll be at the end of a HS Cross Country season and well, we all know that we can’t run fast short and train for something as mammoth as a marathon.  I won’t be busting her bubble now but that’s reality.  Anyhow, back to Sunday!  It was a PERFECT day to run a marathon.  Run any distance really.  Temps were cool, the sky was clear and it warmed up nicely with a tiny breeze to keep us comfortable.  Start line along with 40,000+ other runners. 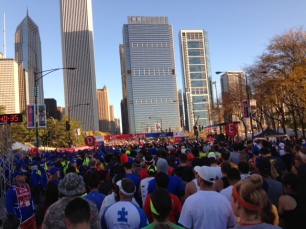 I had one goal for this race:  to finish.  I was forced to take a bit of time off running this summer during the relocation and my build up was a bit too quick and well, I didn’t log the normal mileage.  My longest run was an 18 miler.  I had no idea about pace but knew to go slow.  What I did know is that my feet were in bad shape and I needed to keep moving in order to keep them from tightening up.  I should have guessed from how badly my feet hurt during last week’s 12 miler that things wouldn’t go well.  I have been seeing a physical therapist in Fort Wayne, IN for my plantar fasciitis but he’s been a bit rough on me.  In fact, every week that I see him, I get worse, regardless of my mileage .  This week was the same.  I was much worse than even the week before.  So I was in the mindset to run easy.  Enjoy the course.  And run from one spectator sighting to another.  So thankful that April W took my Aby around for spectating again.  It’s always a highlight to see friendly faces on course.  I saw them at mile 2, then again at mile 13.  I was breaking down badly by mile 13 and my hips were burning because apparently my gait was off due to the pain in my feet.  Both feet.  So awesome. 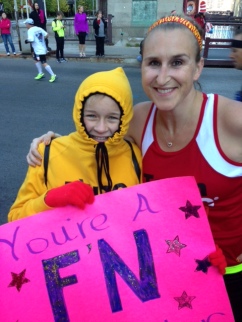 After faking a smile for a pic with Aby, my girl April gave me the only pain relief she had on her person, a Midol tab.  It didn’t touch my pain.  I walked/ran/limped from 13-19 and then I was about done, like out of the game.  Walking was worse than running because I couldn’t put my left foot all the way down so I was walking “crooked”.  The doc who saw me this week said my hips were out of line.  I’m sure they are after my hobble.

So I stopped at the med tent at 19.  In tears.  They have me 2 pain tabs and a nice lady doused my feet with biofreeze to numb out the pain.  I can’t say that I thought it would work.  But about 10 or 15 minutes later, I was on the run again and confident that I could finish the race because the pain was just numbed out enough that I could do another 10K.  THANK YOU med tent!!!!

While I certainly didn’t #OwnChicago in 2014….. photo compliments of my girl Dawn B from WI. 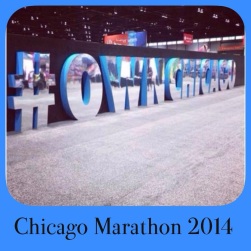 I did finish. And I thank my last 6 miles of “mostly” running to my girl Julie who showed up shortly after I emerged from the med tent.  She was on target for a PR but was running out of steam.  That could have been her excuse to run me in, I don’t really know. Regardless, I was thankful to be with her thru those last 6 miles.  She and I have run a lot of miles together this year.  Some really great ones.  Some really cold, snowy, icy, rainy ones.  And she is one person who I know I’ll always be logging miles with …. no matter where either of us live.  She is also fighting the Plantar Fasciitis devil and we frequently commiserate together.  Thanks, Julie! 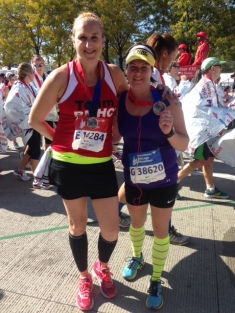 So I finished.  And I’m thrilled with that because it was a fight this time.  I did see a new doc yesterday who filled me with cortisone.  So I’m temporarily pain free and that is a REALLY nice thing.  It’s awesome actually.  And I have a new PT that I get to start seeing on Friday.  New PT is a runner.  Knows running.  Likes runners.  I already like him too!  Looking forward to rehabbing these feet and hitting the road for many more long runs.  I’m going to change my schedule a bit over the next couple weeks to focus on the rehab but I will be finishing the year strong!

Thanks to everyone who was out there spectating and volunteering on Sunday.  I know it’s an exhausting day, even more so that it was for those of us who ran.  Here is my Aby and April’s daughter “spectating” for the last of our crew.  Yeah, exhausting. 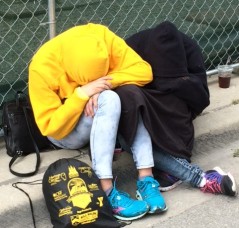 How did Chicago go for you?