The 2016 Fort4Fitness Spring Cycle was on May 21, 2016.  This was the 3rd year for the Spring Cycle event but the first time adding the 100K distance (62 miles). It was also the first time I participated.  To be honest, I’ve been intrigued by the event in the past, but this year the 100K pulled me in for registration!

It was a cool, crisp morning on Saturday with temps expected to reach the 70s.  The 100K had 258 participants, who started at 9am.  The remaining 1,050ish participants started at 10am to ride the 10, 16, 34 or 44 mile routes.  Large crowd.  Easy venue for packet pickup & the start, all of which was at the Arts United Center on Main Street in Ft Wayne.  I was happy to have started early because there were several events in Ft Wayne and parking looked difficult as it got closer to the start time.  So many bikes!  The 100K was off at 9am on the dot!  There I am! 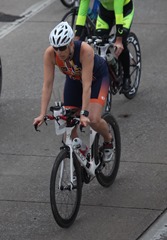 The route traveled thru Ft Wayne, out of town and toward Antwerp, OH.  Mostly low traveled country roads and some busier roads with a wide shoulder.  Police at most major intersections.  Course markers both painted on the road, then larger visual signs to help cyclists follow the route.

Four aid stations for the 100K,  one that we hit 2x, one at the turnaround and the last one near the end.  I only stopped at the turnaround point where I was pleased to see that there was NOT a line to the ladies room but the line for the men’s room was quite long!  Such a roll reversal, where were all my lady cyclists for the 100K?  The aid station had bananas, water & Gatorade, snacks and energy bars.  It was a quick in and out and I was back on the road.  The wind was decently strong and it was overcast.  I was wondering if it would rain even though it was starting to warm up.  I definitely wanted to keep moving and get back to the finish area.

The return trip to Ft Wayne took us down some nice roads with the wind at our back.  Smooth sailing for a bit, then we hit Amish Country and the roads weren’t as smooth (read pretty darn rough on my bum) &  there was horse “debris” that we had to dodge.  Not something I’m totally unfamiliar with but it forces me to be extra vigilant.  About this time, we also started meeting the cyclists from the other events.  That was nice.  I tend to fall in a category of my own when I ride.  I’m not fast enough for the fast people and I’m not slow enough for the slower riders.  That means I spend a lot of time pushing alone.  Not a bad thing because I ride for triathlon and we can’t draft.  Plus, the road cyclists make me nervous when they travel in large packs and are so close to each other.  I always worry they will crash and take me with them!  So once I joined the other riders, it was game on, just like a triathlon when we are pushing back to T2 …… “ON YOUR LEFT”.

I want to shout out all the police and volunteers who helped with this event.  It takes a lot of people to put on a 100K ride.  So many intersections, especially when we traveled thru several towns and the ride started and ended in the middle of downtown Ft Wayne.  Getting back downtown in the afternoon was not an easy task for us or the many police officers who were assigned to help with traffic.  They did a great job and seemed to be patient.  Thanks for that.

I was all smiles when I hit the finish.  I was ready to rack the bike! 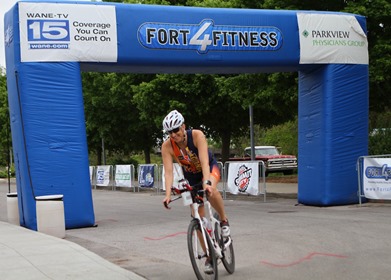 The finish line festival offered a bike valet so we could rack our bikes, enjoy the expo and go to the finish line party.  I was very happy with that.  I was parked very close to the finish line but would not have stayed if the bike valet wasn’t offered.  The first 1200 participants received a medal & tee shirt.  We also received a picnic lunch (hot dog, chips & a drink) and there was beer to purchase for those who were interested.  However, the cycling was definitely the main event.  It looked as if most rode, ate & left.  Good time.  Good day.  Great support.  Thanks, Ft Wayne!  I’ll be back next year! 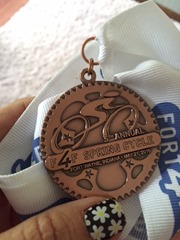