The Huff 50K Trail Run is traditionally one of the largest 50Ks in the Midwest.  The course is thru scenic Chain O Lakes State Park in Albion, IN & features well groomed trails that are wide enough to run 2 or 3 abreast.  At least most days.  The 2016 Huff presented a series of weather challenges in the form of snow & freezing rain that resulted in low turnout and even fewer finishers.

Knowing that the weather was going to be less than ideal on race day, I went to pick up our packets early at Running Around Screen Printing in Columbia City.  Easy in and out. Packet included the normal hand/foot warmers, Huff Logo tee & a water bottle with the Huff logo. I also picked up socks & popcorn at the race site. 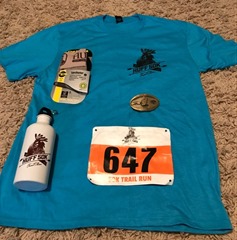 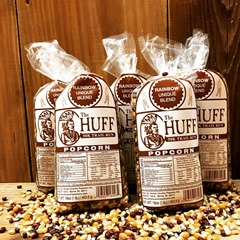 Race day started at 8am.  We arrived early.  Roads weren’t too bad on our journey but others weren’t as lucky.  I immediately noticed that the tent wasn’t very full and the lines to the potties weren’t that long.  I mentally noted that probably less than half the normal runners had shown up, but it was hard to tell.  The One Loop & Relay race was scheduled to start at 8am but the timing system was literally frozen.  They got the “one loopers” going about 8:10am.  Off goes Aby & Annika for their very first Huff experience!!  Pic of us in the tent pre-race. 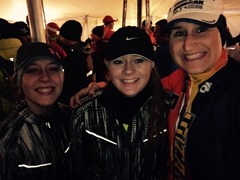 50K runners followed shortly.  Very low key.  Very relaxed.  We started running off the start line and made it maybe 50 feet before the entire group started walking.  We had hit the snowy trail & progress had slowed immediately.  That was the theme of the entire day.  Slow.  Steady.  Just keep moving forward.  My calves & quads & hip flexors were burning from effort before I hit the one mile mark.  Running thru the snow was intense.  You couldn’t really “see” the ground or trail, there was a layer of fresh powdery snow to plow our way thru and it made running hard ….. and slow.  But it was beautiful! 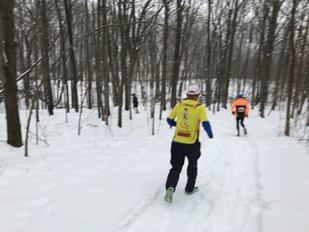 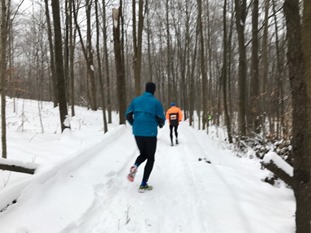 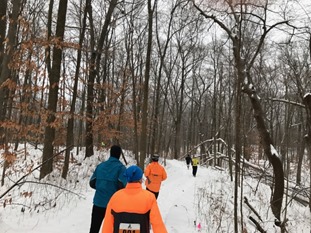 Trail groomers had spent all week marking & grooming trails, running snowmobiles over the trails and trying to pack down the snow as much as possible.  In some areas the efforts were well noted, in others the snow was so powdery that packing it down was next to impossible. 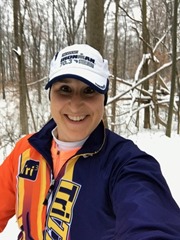 Bridges with steps were impassable due to a layer of ice covering them and railings that were covered with ice and impossible to hold. 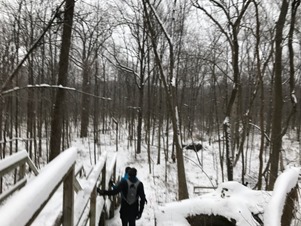 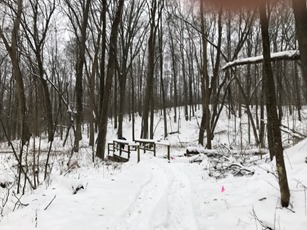 As we were running, the first loop was warmish, probably 30 degrees with a cooler feels like temp.  I knew I was overdressed but I was more prepared for the temps to cool, and the freezing rain that was to come throughout the day.  We got lucky in that it never poured freezing rain on us.  It was a light misty rain.  One where you knew you were wet but weren’t being pelted by rain.  By mile 8, I had a layer ice over the bill of my hat.  My zipper on my jacket was a chunk of ice.  My bib was frozen stiff.  The trails were starting to get more slippery and there was less fight with the fluffy snow.  And the temps were dropping. 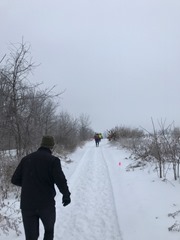 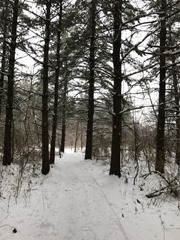 I kept looking forward to the end of the first loop.  My TRI team was working the aid station with the Huff Couch and I was looking forward to seeing some friendly faces!  They even got a few pics of me & a few of Aby & Annika when they passed thru. 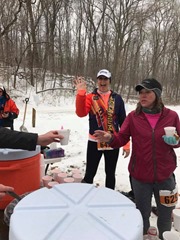 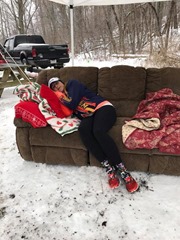 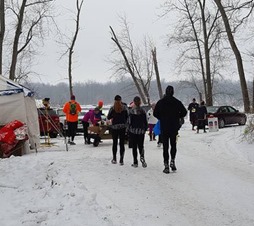 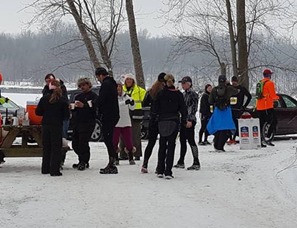 Loop 2 was hard.  I didn’t have as much of an issue starting loop 2 as I have in past years.  I just did it.  No thought.  I just ran past the tent and kept on moving.  I had no idea what I was in for, at all.  I had hopes that the trail would be packed down and the powdery snow would be less of an issue.  That was true.  But what I didn’t anticipate was that the powdery snow would have packed and turned to a mound of ice.  I had Yak Trax in my drop bag, which I passed up without even thinking of stopping for them.  Yak Trax aren’t a huge help in fluffy, powdery snow.  But I had made a huge mistake.  I slipped and slided thru the entirety of the second loop.   It was super icy.  Yak Trax would have given me some traction.  At one point, when I reached a long service road heading into the Rally Aid Station, I could barely get down that road.  It was so icy.  And the snow was plowed up on the side of the road and covered with a layer of ice so I couldn’t walk in the snow, it was too deep.  30 people passed me on that road alone, all laughing at me.  Once I got to the end and had to cross over to the aid station, I about fell (again), in the middle of the road.  A kind lady with ice spikes on her shoes actually grabbed my arm and pulled me across the ice to safer ground.   But alas, the Rally Aid Station is on high ground and it down, down, down from there.  I was quite fearful as to how I’d make it down while still on my feet.  Fortunately, the snow on the side of the trail wasn’t too deep and I was able to walk in the thicker snow.  It had a layer of ice on it but once I broke thru, it was much safer.  That’s how I got thru all the downhill sections from mile 23 thru the finish.  And I did finish.  It was a long fought battle. I was fatigued.  Sore.  I walked a lot more because of the ice than the fatigue so it took forever but really, in the end, the finish is all I wanted. 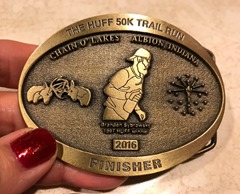 It took me 7 hrs & 50 minutes this year.  An hour longer than last but a finish is a finish.  I changed out of my wet clothes, then went over to hang out with my TRI team at the Huff  Couch aid station.  Done, Done, Done!! 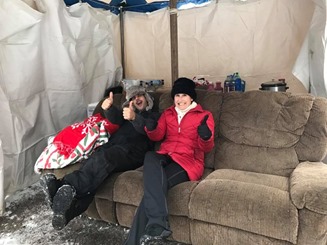 This year the 50K had 231 finishers, compared to 377 for last year.  Many who started, didn’t finish the first loop in time to start the second & were given a 1 loop finisher medal.  We had a total of 423 finisher in the one loop & 50K for this year.  Compared to 666 for last year.  Then the relay division was a huge tell all of what we faced.  This year we had 8 men teams & 7 women teams finish.  Last year we had 8 men teams, 10 women teams & 20 mixed teams.  The weather was frightful and I congratulate everyone who had the courage to show up and run.  Rough day but I know I’ll see you all out there again next year!  Cheers to 2016 being in the books & 2017 being on the horizon!