I have been counting down the day for the 2012 Shamrock Shuffle since we finished the race last year.

This is by far my favorite race of the year and this year will be bigger and better than the previous races because instead of going with 3 or 4 of my closest friends, we have a huge group of over 30 ladies who will be wearing green Team Sparkle Skirts. Here is a preview of a few of us from the Oak Forest Fleadh 5K a couple weeks ago.

Plus we have a few men making the trip this year too.  They received a green sparkle skirt exemption and opted for kilts instead.  Fun!  Can’t wait for the photos!

I have been running this race for several years and recently went back thru and “found” some of the previous year’s photos.  The first year that I could produce was 2009 when I was preggo with Michael but alas the photo was not of me since I couldn’t run.  Here is my friend Cindy (Jackie – The Swim Coach’s mom) & Mark B. (aka – Nitro):

Thanks for running for me Cindy; I know the conditions weren’t “ideal” but I appreciate your helping me out!

2010 was rough for me as I was physically bouncing  back from Mr. Michael.   Even though he was born in September 2009, he had a lot going on and I never really got back to running until January 2010.  So the Shuffle came fast.  And it was hard.  And it was cold.  But it was still awesome because I was with my friend Lisa and a few of her friends that year.

2011 brought my return to fitness.  I ran the 2010 Chicago Marathon and really came into my fitness AFTER the marathon.  If you run a marathon, this may happen to you too.  Your struggle thru the training, you struggle thru the race and then AFTER the race you are on fire.  Strong. Fit. Fast.  Makes for great fall racing if you are a fall marathoner.  FUN!  However, I was so on fire and upping my mileage like crazy that I managed to hurt myself at the beginning of March 2011.  I went into the Shuffle with a smile but hadn’t run a step in weeks.  C’est la vie!  FAVORITE.RACE.OF.THE.YEAR.

And in case you can’t tell from the photo, it was hot .  But I had more “friends” this year.  My friend Lisa, brought the entire clan:  Hubby – Mike, Son – Logan, Lisa & Daughter – Rachel. 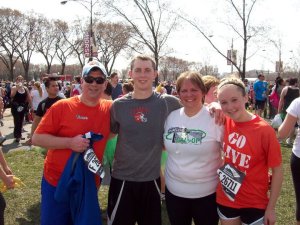 To me, this race is about more than running, it’s about spending one weekend a year fully devoted to friendship and a healthy lifestyle.  A huge thank you to my friend Lisa, who comes each year from Wisconsin to celebrate this weekend with me.  Really awesome!

So CHEERS to the Shamrock Shuffle 2012!  I will ENJOY the atmosphere and the celebration no matter the weather or the results!

Do you have any annual races or celebrations that have become tradition to you?