Seven days out from Christmas and I’m in disbelief that the year is almost gone.  Most of the time at year end, as I’m sitting in this position looking back, I’m able to take pride in the goals set and attained.  Not so much this year.  I struggled to build back up after some time off at the end of 2011 (a failed attempt to clear the plantar fasciitis).  Then I tore the tendon in my foot at the beginning of summer.  I will not run 1000 miles this year.  I did not run a 1:50 half marathon which I thought was an absolute no brainer.  I did not break 6:30 for a half iron event which I also thought was a no brainer.  I did not complete even one triathlon.  I did not run a marathon.  I did not maintain my weight.  I did not do a lot of things that I had thought were so very possible at the beginning of 2012.  But alas, it wasn’t a bad year.

Occasionally, we just need to “let go” of our goals and go with the flow.   Some things are absolutely beyond our control.   You know the difference between being lazy and not making it happen verses life/injury got in the way and derailed the plans.  So if your life, or God’s plan for your life, got in the way this year and you DID NOT #MakeItHappen, then please take a minute, right now, and let it go.  Next year is another year.   The point of making goals is to constantly challenge oneself and be the best person that you can be at any given time.  Sometimes, the best we have at a given moment is sitting in the rocker ….. rocking our sick child.  Or icing an injured foot over a cold Corona Light.

So as I look back, I do not see failure but instead I look at the positive things that I did accomplish.

I got a photo with THE Green Men at the Shamrock Shuffle this year!  Major accomplishment!  Expect to see this photo several times a year from now til eternity.  I’m VERY proud!  (Nicole F, me, Green Man #1, Maggie, Green Man #2, & Kelly)

I raced my first relay event with my “baby” girl, Aby.  Tinley Park Duathlon where my “baby” OFFERED to run for me so that I could still participate even though I was still very early in the injury stage and couldn’t even walk without a limp.

I watched that same baby girl become not just her own person but a really FAST runner. 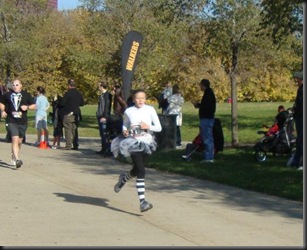 I managed to keep my crazy lil man safe “enough” to make it through 2012. 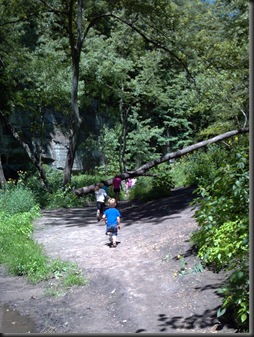 I’m still married. (This will be the only time that you will see me in a bikini…..only photo I have of hubs & I from 2012 and I may delete this section before I actually publish).

So 2012 was not only a good year but a great one!  I encourage you to focus on the positive and do your damndest to make 2013 EVEN better.  We only live once.  Make it count.