The time has finally arrived and even though its April and we should be looking for spring flowers, we are instead still hung up on Saint Patrick’s Day as we await the annual Shamrock Shuffle 8K in Chicago.  Thanks, Bank of America for trying to get us a day with great weather even if we are already looking forward to Cinco de Mayo!

If you haven’t ran the Shamrock Shuffle 8K, your missing out.  Everyone says so.  Just ask Kelly at Running Kellometers!  The Shamrock Shuffle is “officially” THE.BEST.RACE.EVER at least in our opinion!  Even the chick on the promo page thinks so, look how happy she is to be wearing green and ShamROCKing Chicago! 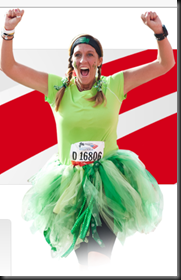 And if you know the chick above, I’d LOVE to meet her.  In fact, Kelly would too cuz we know a Shamrock lover when we see one!  Tell her to look for the green sparkle skirts, the ones chasing down the green men for another photo.  The photo below, maybe just be the best photo that I’ve ever gotten at a race and I didn’t even “get” it.  This was courtesy of Nicole F, first from left.  Ms. Fastie can run AND carry her camera simultaneously!  Win!!  So myself, Maggie & Kelly were able to score big on her talent!  No fear, I’ll have my FlipBelt this year so I WILL have a camera on me at all time.  Watch out! 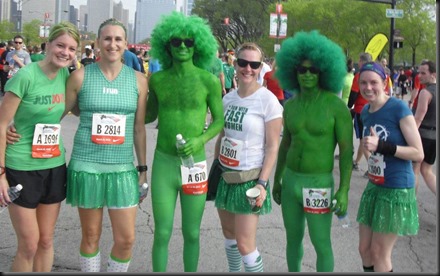 If the amazing chick from the Shamrock Shuffle promo still can’t pick us out of the crowd since there will be so many fab women in green Team Sparkle skirts, then she should come to the beer tent after party and look for the crazy lady holding the green dye.  I mean really, what kind of St Patrick’s Day party can we have without green beer?

And yes, Brian J, I did steal your photo of this green beer.  Don’t sue me, okay?  I did put the die in that beer for you so it makes it half mine, right?  If not, I’ve already been punished enough by having to steal it from your mobile uploads.  Dude, you have some scary shit in that folder!

Yes, I’m looking forward to the Shamrock.  This will be the first of a billion posts about it.  The best part of the event, besides the fact that it’s the BEST.RACE.EVER., is that the whole weekend is about my run friends/family, even the Emendorfer’s come to town each year to whooooop it up with me! 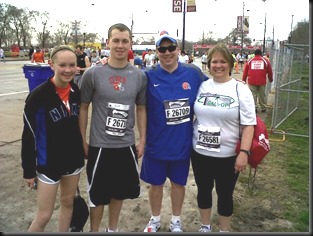 So look for my green sparkly crew!   We will be here, there and EVERYWHERE! 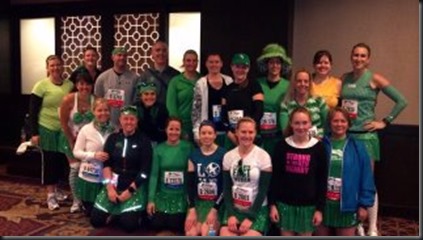