Since I moved to Indiana, I’ve had a lot of foot pain.  I took most of the spring/summer off running.  Actually I was running, but very little.  Sporadically, if you will.  Sometimes not at all.  Hubby had moved to Indiana before the kids and I.  Therefore, I was alone with the kids & pets.  I was trying to find a house in the new area.  I was traveling back and forth every weekend (400 miles round trip) on the frustrating great house hunt.  I was trying to keep the kids from killing each other fighting.  I was chauffeuring them to every doctor/dentist appointment that they needed before they transferred to a new school.  I was also trying to pack up a house.  Train a new puppy.  Plus I was working full time with a nasty commute each day.  Life got in the way of workouts.  It happens.  But one thing was constant, my foot pain.  Thank you Plantar Fasciitis.

Once I returned to the run, the foot pain went from discomfort to full blown pain.  Every step hurt.  A lot.  So I decided to try to find someone to help me.  When I was in IL, Dr. Alexis kept me up and running.  She was a Chiropractor but more than a “bone cracker”.  Her family practice focuses on the health of the family.  She has a lot of skills and treatment methods that a normal Chiropractor doesn’t.  Big shoes to fill.  Plus she was a runner.  And never complained about my running, at least to me.  Yeah, REALLY big shoes to fill.

After asking every fitness person I knew, wasn’t a big list in my new town, I was directed to my first Physical Therapist.  He didn’t like runners.  Not sure he even liked me.  He hurt me badly.  He made my PF worse.  Then I saw another PT.  He was a Cross County Coach.  So he liked runners, right?   Maybe.  He was all business.  Not sure what he liked.  Very firm as to what I could and couldn’t do.  I actually took 2 weeks off cuz he scared me.  Then I moved on again because well, I wasn’t getting better.

What did the 2 PTs have in common?  They focused specifically on my calves and soleus. Both did Graston.  The first guy would make me cry because he scraped my calves so hard.  The second guy was more gentle but still, it was the same.  Scraping, scraping, scarping my calves and soleus.  And a shit-ton of stretching exercises.  Nobody touched my feet.  They both thought my PF problems were centered on the tight calves and soleus.  Both of which were marbled/bumped up like a “gravel road”.  I didn’t get better.  I spent a lot of $$.  I stopped going to PT and I’m not sure I’ll ever go to another PT, short of being forced.

Now I’ve found a Chiropractor, 7 minutes from my house.  A family practice guy.  Big on rehab.  Diet.  Exercise.  With a bag of tricks.  So guess what, someone finally cares about my feet again.  He says they are the “worst” he has ever seen in his practice.  Must not see many distance runners, huh?  Lots of Graston. Lots of Rapid Release Technology (description below).

RRT relies upon the science of resonance.  Like the piano note vibrating the corresponding guitar string across the room, the target absorbs vibrational energy and oscillates.  Same principle as the opera singer who can vibrate a crystal glass across the room until it breaks.  RRT operates at a frequency over 3 times faster than the fastest competition.  Notice the symmetry of high speed compression waves through healthy tissue.  Now notice the lack of waves when RRT is put over chronic fibrous tissue.  The energy is absorbed by the denser tissue and it begins to vibrate.

Lots of talk about what I should do besides running.  He used to run but has done extensive research and has basically bagged running for other things.  Good for him.  Not good for me.  So this week, after suggesting for the 2nd time that I take 6 months off, he basically said, “why do you have to run”?  Good question.  My quick answer was very basic:  Cuz I might kill someone otherwise.  It keeps me in check mentally and regulates my mood.  Some people take Prozac, I run.

I run when I want.  Where I want.  And the only thing that stops, or slows me down, is the family schedule.  It gets me out of bed in the morning and energizes me throughout the day.  If I take a weekend day off the run, what happens?  I sleep in but am always still tired.  I get up grumpy cuz I never feel refreshed.  Then I get a cup of coffee and sit in the recliner or on the couch and veg out on Facebook or TV.  I’m not motivated to do anything.  I don’t want to do anything.  Different story after I spend a couple hours running.  I’m motivated to LIVE life.  That’s why I won’t stop running.  Maybe tomorrow or the next day will be different and I will no longer have the desire to run.  But as for today, I want to run.  Nothing is broken.  Nothing is torn.  Let’s just fix this and then maybe we can be friends.  I mean, I’ll waive to you as I’m running laps at the Y and you’re below with your buddies beating the crap out of each other playing basketball. 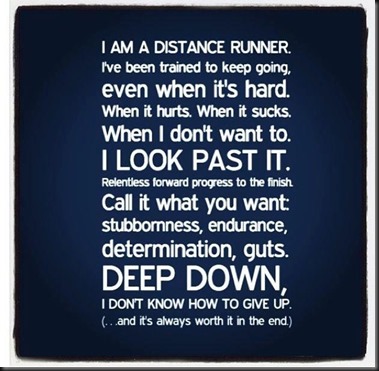 Related post.  It’s an oldie but goodie:  I Am A Runner.

Run happy, if that’s your thing.  If you like football or basketball, find a league.  If you like to lift weights or CrossFit, awesome, go kill it.  Cycling?  I’ll see you on the road come spring!  There are so many different activities, go find one that you love!