I’ve ran the Sunburst Races multiple times but each time, I’ve ran the half marathon.  It’s definitely the race with the most participants and a manageable distance for me when I’m also training for other events.  The full marathon, is a bit of a push.  Always difficult.  Always taxing.  Always an event where anything can happen.  But I took the gamble for 2015 and threw my cards in for the full.  26.2 here I come … and fortunately, Julie came too.

This was our 20th marathon.  Although we haven’t ran all the others together, we have ran a good number together over the course of 2014 & 2015.  So it was a bit of a celebration and we were excited to be on the same number at the same race.

Temps were cool, in the low 60s at the start and climbed to 70 degrees by the finish.   This race is known to be a “hot one” so I was happy about the weather!  The sun was shining and it was a beautiful day.  Easy packet pick up the morning of the race.  Easy, free parking!  Cute shirt.  Early 6am start to get the marathoners on their way before things got too busy with the other races. 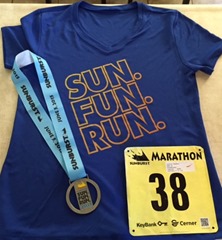 Due to the construction at the Notre Dame stadium, both 2014 and this year (2015) boasted new finish line areas and new courses.

I thought the course this year was very well laid out.  We saw lots of sites.  Ran various trails & waterfront paths.  And we were mostly shaded, which is a huge bonus! 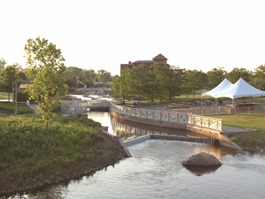 As usual, the aid stations were plentiful, approximately every mile in most areas.  There were a couple aid stations that offered GU, wet/cold sponges & bananas.  Nice set up and friendly volunteers.

We ran thru the same neighborhoods as in previous years but didn’t spend so much time “circling” as we had in the past and that made me pretty happy.  I’ll be honest, I had not heard anyone say anything positive about the Sunburst Full from previous years.  Most of the people I know who have ran it previously don’t plan a return trip.  As a result, I was nervous about about the race.   But I think the course change really knocked it out of the park.  There were a couple spots that could still use some improvement but overall I think they really did a great job.  And they added a killer character building hill at the end.  Both the full and the half ran up “Hallelujah Hill”.  Or at least we were supposed to run up it.  Julie and I walked.  She probably could have ran it cuz she is a decent hill runner but I was in walking mode by then.

The finish on the Irish Green was much better planned out this year.  There looked to be plenty of space to hang out and wait on friends.  Melanie & Jill were awaiting our finish after their first half at Sunburst so it was nice to see some friendly faces at the finish.

#20 is in the DONE column!  Next up, the Marion Rotary for Shoes Marathon in Marion, IA on Sunday!