I’ve always put limits on Aby.  She wanted to run her first 5K when she was so small that she called them K5s.  She’s wanted to run a half marathon for years and I told her, “not til you are 13”.  She wants to run a full marathon and I say, “not til you’re 16”.  Good or bad, that’s what I’ve done.  I see kids a lot younger than her running longer races and I don’t judge those parents but for Aby, I worry about injury and burnout.  Quite frankly I want her to be a runner and fitness enthusiast for life, not one who has accomplished everything before she can drive.  So we have limits.

I did let her participate in the Mini Muddy Buddy when she was 5. 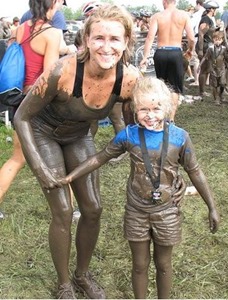 In the interim between that first 5K and now, we’ve ran a lot of 5Ks, 4 milers, 8Ks, teamed up for duathlons and ran countless miles together sometimes when she would have rather ran alone. 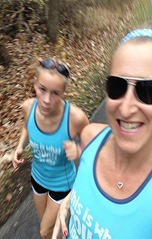 She’s also ran a few Cross Country seasons.  And she’s been there to support me and spectate a “few” marathons. 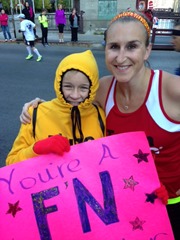 Now she is 13 and has finally made it to her first half marathon.  We had planned this race for quite some time.  She picked it last year before she even turned 13.  I registered us both.  Created a training plan.  And she ran all summer, slowly building up to the 10 mile long run and race day.  The Rock and Roll Chicago Half Marathon on July 19th (2015) was her first half marathon.  We spent the weekend in the Chicago area.  Picked up her XC spikes for the upcoming Cross Country season.  Hit the expo.  Spent time with friends. 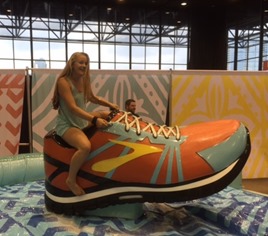 Race day arrived and it was hot.  And humid.  Temp was upper 80s with a “feels like” time of 96 degrees.  The plan was to run slow.  Very slow.  And to make sure we finished under our own power.  I’ve seen way to many people go down in hot races.  I’m always overly cautious about pace in the heat. 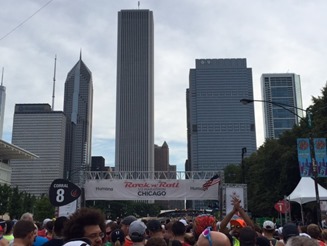 We stuck together.  Walked thru the water stops since a lot of the volunteers hadn’t showed up since it was so hot and we had to wait in line for fluids.  Took our time.  And enjoyed ourselves.  I didn’t want her first half to be miserable even though the conditions were less than ideal. 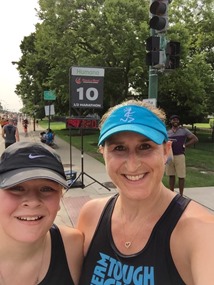 At mile 11, she took off toward the finish and notched off her first half marathon finish!  Goooooo Aby!!!  She was flying!

My baby girl is growing up!  She ran a smart race and had fun.  Lots of time to add speed later but her first half marathon was fun and that’s something she will always remember.

Cheers to our friend Nicki who spent the weekend hanging out with us!  She has ran a lot of races with Aby and I over the years. The weekend wouldn’t have been complete without her there to witness Aby’s first half finish.  Thanks, Nicki!!.

I know that I won’t always be able to run and race with Aby but I certainly cherish the times we’ve had thus far.  She’s getting older.  She has her own agenda.  But fortunately, at this point, she doesn’t have a driver’s license so she still depends on me for a ride.

** Making Run Memories, One Race At A Time ** Amanda – TooTallFritz