The Route 66 Marathon is in the done column & so is the great state of Oklahoma!  This was my 25th marathon and the 15th state in my quest to run a marathon in every state.  In order to be totally honest, when Judy talked us into Rt 66 we signed up, I didn’t exactly know where Tulsa, OK was on the map.  So I think I asked a few questions before pulling the registration lever:  1)  Can we drive there?  2)  It’s the weekend before Thanksgiving, can Julie get time off from her retail J.O.B.?  3)  Is anyone else running?   Turns out EVERYONE was running, so it was a done deal.  We went to Tulsa, Oklahoma with 2000 other Marathon Maniacs, Half Fanatics & 50 States Club members.  I’m in the back.  Don’t worry, I can’t see me either. 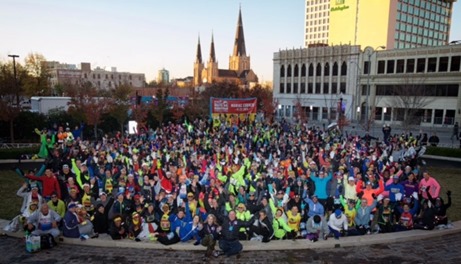 Tulsa was a 12 hour drive from Auburn, IN.  Takes longer when you have car trouble and have to stop every 2 seconds to turn off the car to reset the code and/or try to find a dealership with an open service department, in God’s Country, on a weekend.  Yeah, that happened but we finally rolled into Tulsa early Saturday afternoon.  Tulsa is in the north east corner of the Panhandle State.  Hello, Oklahoma! 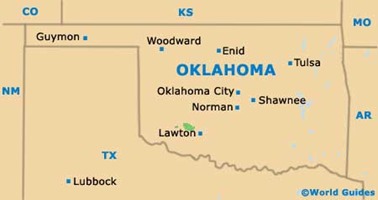 I was scheduled to be part of a Blogger Forum at the expo Saturday afternoon.  We made it in time for that and I got to meet some other bloggers and hear some great stories about running, blogging and life.  From left to right:  Esther, Jim, Joules, Angela & me.

The expo was a decent size but packet pick up was crowded and the computers went down causing long lines and some crabby runners.

Fortunately, we were in and out of the expo pretty quickly. 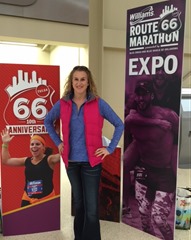 We hit some key booths:  Garmin & Gypsy Runner (cuz Amy runs a lot of the same races that we do, so we are totally BFFs, right?), then on to the hotel and dinner.

Normally, I try to keep things positive and upbeat but from runner to runner, I feel the need to share.  If you are planning to run this race next year, I’ll tell you where NOT to stay.  The Holiday Inn Express & Suites Tulsa WEST – Sand Springs, 101 West Marrow Road, Sand Springs, OK.  Although we had called BEFORE we booked a reservation and were guaranteed late checkout, the manager did not honor that request when we checked in on race weekend.  And she was rude.  We were told to get our stuff out of the room on race morning, then come back after the marathon and she would check to see if they had a DIRTY room they had not yet cleaned.  IF she could find a dirty room, then maybe she would let us shower there.  Yeah, that didn’t happen.  I don’t want to shower in a dirty room where I don’t even know the former occupants.  This was a very unpleasant experience and now I’ve removed the Holiday Inn & Holiday Inn Express from my list of acceptable hotels.  I run a lot of races.  I travel for running, work and leisure and I have to admit that most places we stay are very accommodating.  Nobody has ever rudely sent me on my way, without a shower, for a 12+ hour drive, after running for 4-5 hours.  And hopefully this will never happen again.  We had multiple friends who had a great experience at the Double Tree, 616 W. Seventh Street, Tulsa, OK.  Do yourself a favor and stay there instead.

Onto the race itself.  Very cold morning.  Race start and finish were in two separate locations but there were shuttles between those spots.  Win!!  We were underdressed and froze our bums off awaiting the race start.  But once the race started it was worth the wait.  There were starting corrals with very strict watchers making sure everyone was in their correct place.  5 minutes between corral starts.  Each corral was sent off in a flurry of confetti.

As always the first 3-4+ miles were super crowded, although for once, I didn’t have to run around a lot of walkers who started ahead of me.  But the streets were narrow and I wouldn’t so much see the hills we were running but rather feel the momentum going up or down.  It was a strange feeling but a cool one.  The course was beautiful and a perfect highlight reel of Tulsa:  Cascia Hall, Woodward Park, Rt 66 Pedestrian Bridge, University of Tulsa & amazing neighborhoods that were both pet & kid friendly.  It looked like an awesome place to live with so many houses showcasing lots of unique character.

Bands.  Lots of bands.  The Rock N Roll series has NOTHING on The Rt 66 Marathon.  Nothing.  I heard more live music in this race than I’ve heard in all of my combined races this year.  Everything from Folk to Gospel to Rock to Bongo drums (we saw that guy 5x, he was committed to us in a HUGE way).  Great show, Tulsa, really great.

Community support!  Wow.  Marathons take a long time.  This one took me personally FOREVER to run.  The community was out in full force, even in the chilly temps, with kids, dogs, food, drinks, jello shots, mimosas, beer shots, and even offering therapeutic rollers for those of us who had gotten a “little” stiff from the hills.

Hills?  Did I say hills?  Yes.  Lots of hills.  More than I had expected and I didn’t fare very well on them either.  Without going into all the bloody gory details, I fell last week while running and managed to mess myself up pretty good.  Well, I didn’t really know how messed up I was til I started hitting those hills.  Apparently I did more than bloody myself in the fall.  My hips are WAY out of line now and I stretched some of the muscles around my right hip and left knee.  So I was a hurting momma in Tulsa on Sunday and to be honest, had it not been for my BRF, Julie, I would have quit.  I almost quit anyhow.  But she “carried” me thru and stayed with me even though she could have ran so much faster.

So, did we take the detour?  Heck yeah!.  The Rt 66 Marathon offers a Center of the Universe detour.  It adds 0.3 miles to your marathon and you get a cool looking coin for taking the challenge.  DONE! 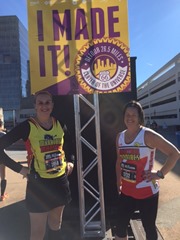 And we finished.  Cool medal.  Cool after party.  The Marathon Maniacs had their own special Maniac Corner where we traded in our medals for special Marathon Maniac medals.  Super cool.  This really is a must do marathon if you are a Maniac.  It’s a GREAT race with lots of support from the race volunteers, the local law enforcement and the community.  And THAT’s what makes for a  great marathon.  Julie, Judy & Me in Maniac Corner cuz we are definitely some sort of maniacs. 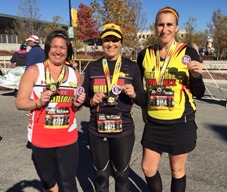 Thumbs up for Tulsa & the Route 66 Marathon!