Last year at this time, I could hardly walk.  The Plantar Fasciitis Devil had a firm hold on both of my feet.  I could move once I got warmed up but if I tried to run, I would tighten up after a few miles and normally be stopped in my tracks.  If I tried to “push thru”, I would be rendered useless for days.  I would tighten up when I would sit down.  Or go to bed. Or drive in the car.  Walking was nothing but excruciating to the point that my non-runner (and generally unsympathetic) hubby would walk thru the house multiple times a day to clear the floor of toys, dog bones, debris or anything on which I could accidentally step because if I stepped on anything, I would crumple to the floor in pain.  I wish I were exaggerating but if anything, I couldn’t possibly give an idea of how badly I was hurting if you have never experienced the deep grips of Plantar Fasciitis.

For all who witnessed my pain, or if you asked my hubby or the slew of Physical Therapists, Orthopedic/Sport Med docs and Chiros that I saw when I moved to Indiana, the idea of me running “much” in the future was slim to none.  I was scheduled to run the Back 2 Back Challenge 2015 which was the Mississippi Blues Marathon & First Light Marathon double, but I could not do it.  I mean, I couldn’t walk, I certainly couldn’t run 2 marathons in 2 days.  So, I deferred my entries to 2016 with a hope and a prayer that I could get the PF under control within a year.  And I did, thanks to some amazing Chiropractors at Optimum Performance in Ft Wayne, IN.  HUGE shout out of thanks to Dr. Russell & Dr. Goins for everything they have done for me over the last year.  And for not taking the easy way out by just saying, “stop running”.  For the record, as of today, I am pain free.  Like zero pain when I walk or run or get up out of bed.  Pain free.  And I am beyond grateful.

MS Blues offered a small expo at the Jackson Convention Center and easy packet pick up before the race or even on race morning, if necessary.  Parking was easy and free.  Packet Pick up was fast and painless.  We even spotted and shopped with our favorite marathon runner and expo booth, Gypsy Runner.  Thanks for hooking us up with some cool stuff, Amy! 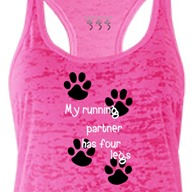 This year’s race was all about honoring BB King who passed in 2015.  They put a BB King CD in each of our race packets.  We also each received a harmonica with the date/logo of the event & a cool unisex 1/4 zip with BB King on the back.  Great swag.

If you’ve talked to anyone about the MS Blues Marathon, you’ve probably already heard about the hills.  So let’s just get that out of the way right now.  This race is hilly.  And I don’t mean maybe.  Very hilly.  I think Judy said that we climbed over 5500 feet in elevation over the course of the race.  And descended about the same.  So many ups and downs on this course.  Pretty much non-stop.  But it was beautiful.  Great course thru stunning neighborhoods, amazing homes, great volunteers and police who were actually smiling and thanking us for coming to run their city.  Small race, with approximately 755 marathon finishers,  1871 half finishers, 307 Quarter Note finishers & 28 relay teams.  We had a lot of fun, even with the rain.  We started in the rain and finished in the rain.  In fact, there was as much rain as there were hills, maybe more.

Steamy pic of Julie, Judy & I under the lights pre-race. 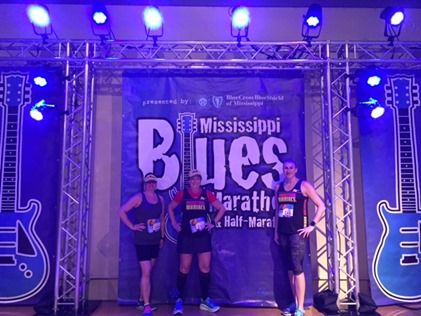 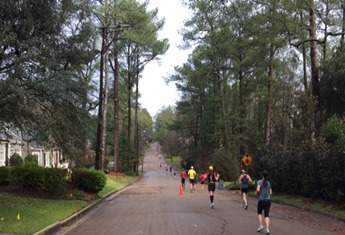 MS Blues really does it right and we really enjoyed ourselves.  They focus on the Blues element of this historic area.  In fact a portion of the proceeds from the race go to the local Blues Foundation.  Generally this race has a 9 different spots for live performers on the course but the weather was bad this weekend.  There were a few spots where we heard music but nothing like there would have been had it not been down pouring rain most of the day.

We finished.  It was very slow going in the beginning because the streets just could not accommodate the number of runners.  We were really packed in tightly for several miles. Not a problem for us but if you want to race this, then plan a slow start or head to the front!  We just took it super easy and walked a lot of the hills since we were headed to Mobile AL for another marathon on Sunday.  We finished in 5:10 (factoring in way too many potty stops and a lot of hill walking) and the sun had finally came back out, minutes before we crossed the finish line.  Yay for the sun.  Judy, Julie & I at the finish.  Very cool BB King medal with a hanging guitar pick.

There was a finisher party with food & music but the music wasn’t playing and the food was gone when we got there.  Supposedly more food was the on the way but my tummy was already upset so we waited a half hour and then left to get cleaned up and back on the road for the trip to Mobile, AL.

If you can hang out in Jackson after the race, there is a very popular Blues Crawl that takes you to some of the local music venues in Jackson post race.  There is also a Blues Trolley that does the driving in case you want to have a beverage.  We missed the fun but I heard that it’s amazing.