The Flying Pig Marathon was my 32nd marathon.  Let it suffice to say that I know a good race from a bad one and I’d put Flying Pig at the top.  This was definitely one of the best races I’ve ran to date.  I’d go back to run the hills of Cincinnati anytime.  They did an amazing job with a lot of people, in very warm conditions.  Plus I’d like to shout out kudos to the communities, all of whom embraced this race as their own and were PROUD to showcase their town, their neighborhoods and they brought fun, food, music & games curbside for the runners to enjoy.  Incredible, Cincinnati, absolutely incredible.  Thanks for letting me run YOUR town.

The theme this year was “Get Oinked for Life”.  As I understand it, they have a different piggy theme each year.  But the swag is always amazing.  This year they gave a gender specific tee, poster, gym bag (with yoga mat holder) & a buff at the finish line.  I’ve seen finisher hats in years previous but it was a buff this year.

Nice sized expo with lots of Flying Pig logo’d merchandise.  I normally don’t buy much from the expo but I had a feeling this was going to be a great race so I grabbed a visor & an insolated water bottle, which was a fundraiser for Big Brothers Big Sisters of Greater Cincinnati.

Lots of piggy photo ops too.  If you didn’t get your pic with one of the many cool looking piggies, then really, can we even be friends?  Get excited, people!  Have some fun!  WhoooHoooo!  Me & Lindsay Glitter Girl on the Run leaving the expo on the right.  Pigs FLY in Cincinnati!  Yes, they do.  And thanks, Lindsay for being excited about all the cool piggies!

This race was much larger than I anticipated so getting to the start & into the corrals on Sunday morning was a bigger process than I anticipated.  We had plenty of time but there were a lot of people (over 39,692 participants for the entire weekend)!  I said goodbye to Lindsay as she went into our corral.  Pre-race selfie with Lindsay below!

Her run plan was to crush the hills.  My run plan was to 1) not let the hills crush me, 2) have fun, 3) find some bacon, & 4) run with my friends!  So I went back a corral to be with friends and hope that they would walk up some of the hills with me!  Found Julie B at waiting for us at the entrance to Corral F!  Julie B, Tamyra & I walking up one of the bridge inclines around mile 3.  All smiles. 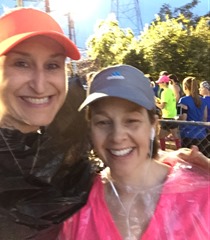 The sun was coming up.  The fog was lifting.  It was turning into a glorious day and we were all happy to be in Cincinnati to Fly with the Pigs!

I found bacon immediately within the first couple miles (blurry pic but I was excited!!).  Then I found Elvis.  We ran in and out of Cincinnati several times.  Over 3 different bridges, past a few more. 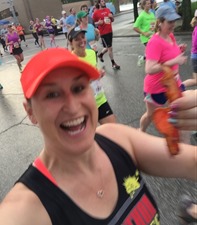 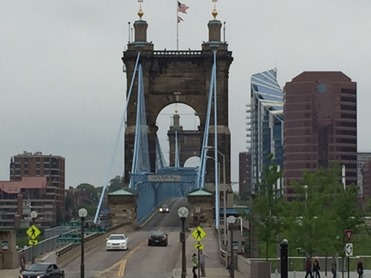 Past Horseshoe Casino & into Eden Park.  The views in Eden Park were breathtaking.  It was hard not to linger and enjoy the view.  Most everyone was stopping for pics & I love to see that.  Runners ENJOYING the race vs zooming past all the cool stuff!

We said goodbye to Eden’s park, passed under a cool footbridge & headed to the split for the half & full marathons.

The split was huge.  There were 12,532 half marathoners (including walkers) and they split at an intersection with one of the most beautiful churches I’ve ever seen (pic below).  Then the full marathon continued and had 3,861 finishers (including walkers).  I would like to note that the full initially had 4,737 registered runners.  Not sure how many bowed out or dropped to the half pre-race but the conditions got very tough and a lot of people were not able to finish.  I really hope that we didn’t lose 850+ people over that last half of the race.  That’s a big discrepancy in registered vs finished.

After we dropped the half runners, we started to stretch out and head toward the neighborhoods.  There are a lot of races where I’d tell you to stick with the half.  So many races put all the sites & fun in the first half because the number of half runners always trumps the full marathoners by a lot.  They focus on those runners and then just stretch out the course for those of us who “have to” run the 26.2 distance.  Cincinnati was NOT like that.  There was plenty to see and fun to be had in the last half of the race.  Plus, I’ve honestly never seen as better proration of volunteers to runners.  Even the people who didn’t volunteer in an official capacity brought the party to the curb as we passed thru their neighborhood.

I’ve never ran a race with the level of community support that I saw in Cincinnati.  Full on block parties.  Lots of drinking in the early a.m.  More piggy decorations than I knew to exist.  Beer shots.  Mimosas.  Margaritas.  Music.  Cheers.  Laughter.  Painted streets.  Encouragement galore.  And dogs.  If you love dogs as much as Cincinnati loves pigs, then you will be in heaven.  Big dogs.  Little dogs.  Old dogs.  Puppies!!  Fat dogs.  Skinny dogs.  Hairy dogs.  Friendly dogs.  Scared dogs.  LOL!  I loved the Cincy dogs as much as I loved the people!!

The race stretched out.  Hill after hill.  Big hills.  Little hills.  But always hills. Hard race.  Don’t let all the fun deter from the hills cuz Cincinnati is know for hills more than fun.  There was over a 1000 feet of climbing and just as much descending (ironically not much  more climbing than in Olathe KS for the Garmin Marathon that we thought was flat & fast!).

Our turnaround point was the Village of Mariemont.  Cute community!  By this time, I was soaked.  It was hot. Full sun.  I was dumping water on my head & I was drenched.  So, no pics by me but I grabbed this from the Mariemont Inn website because I wanted you to have a small taste of Mariemont.  The entire area was just this awesome.

By the time we got to Mariemont and were headed back to the City, the temps were soring and the runners were starting to suffer.  Some had been suffering for quite some time. I was hearing a lot of ambulance sirens.  I was worried about those around me. I was doing okay but going at a very pedestrian pace.  Lots of walking.  Lots of water intake.  Lots of electrolyte intake.  I hit every sprinkler and loved the Cintas station that set up with icy cold towels, dry towels and full water hoses with shower heads!  About the time things started to get really bad, race officials had gotten ice and were bringing it back to runners.  They had gators loaded with cases of water, huge bags of ice and were proactively headed from the finish back toward the runners still on course.  I was very impressed that although they had not planned for the higher temps, they were proactive and did what they could to help the suffering runners.  That’s a great race organization that is able to react quickly to a less than ideal situation.

There were also about 30 bike support people on course who were watching the runners very closely.  They had supplies on their bike and would go get something a runner needed.  Med & aid stations toward the end were stocked with margarita shot blocks with extra salt, Coca Cola and things that we normally don’t see at road races.  I was very, VERY impressed with the Flying Pig Marathon.  I will definitely go back and run it again. 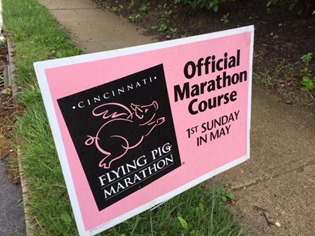 I’m headed into triathlon season now.  My next marathon will be on October 1st in Fort Wayne, IN.  The Fort4Fitness event that I’ve loved since its inception in 2008 is offering its first ever marathon and I can’t wait to run in my back yard and rock the run in Ft Wayne.  Flying Pig reminded me a lot of Fort4Ftiness in the way the communities come out to support the runners and that made me even more excited about the upcoming Fort4Ftiness Marathon.  I hope to see YOU in Ft Wayne on October 1st!