I must say, this was the most fun I’ve had (so far) at RNR CHI.  This was a no pressure year. I’m currently focusing on my nutrition & recovery so I can hopefully kill IM 70.3 Steelhead.  Therefore,  I wasn’t worried about the weather or what was to come, I just settled in with Julie B and ran.  The weather was amazing this year.  Coolish, high 60s at the start.  In the 70s at the finish.  Cloud cover.  Light breeze.  Little did I know that the great weather was due to a storm brewing nearby.  Hmmmm…..

Early 6:30am start, cuz its July & we want to beat the heat!!  Corral start.  Corrals were separated by 2-3 minutes.  Course was crowded but I never felt hindered.  Once thru the first mile, our corral had already thinned out and we were free to run whatever pace we could manage. Aid stations & porta potties every mile or so.  Bands every couple miles.  Gels between mile 9 & 10.  Cold sponges at mile 11.  The half was 100% on the streets of Chicago this year, from start to finish.  Nice course.  As for the 10K, they started with the half, then split early, within the first 1/4 mile of the race.  They turned off the streets and onto the lakefront path at Dusable Harbor, then ran the path to McCormick Place.  They finished with the half route for the last 3ish miles.  A couple pics from the course.

This race is about fun.  I know some feel the need to race every event and that’s great, but that’s not where I am at this point.  I’d rather enjoy the run with friends than rush off and try to win.

So I’m thankful for my run friends, like Julie B who put up with my non-stop chatter while we run.  Fun day in Chicago!  And we beat the storm but just barely.  We finished and I immediately made a dash for my car.  It started raining, just as we hit the parking garage.  By the time we were out of the parking garage it was a total downpour.  So I missed hooking up with some of my other friends who ran.  I missed utilizing the VIP tent for the after party.  But ultimately, I go to an event for the running aspect and I loved RNR CHI this year!  Thanks Chicago!  Thanks Rock N Roll Marathon series!!!

At the finish with Julie B. 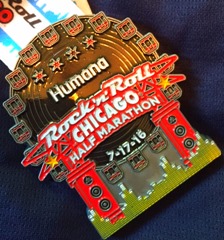 If you are interested in running Rock N Roll Chicago next year, they are doing an early bird pre-sale now!  The half is only $50, the 10K is $35 & the 5K is $30.  You can register here.   If you are interested in any of the remaining 2016 Rock N Roll events, feel free to use my discount code (TTF2016) for $15 off any half or full events.  I believe its active for every race EXCEPT San Antonio, as of right now.  I’ll be running the full in Vegas in November, then San Antonio in December, in case your interested.