Ten degrees……the coldest it’s been so far in Illinois for the start of winter 2011-2012.  Wow, it was hard to get   “up and out” this morn.  The thing that propelled me forward was actually the fact that I had the time, the kids and hubby were out of the house, and I really WANTED to go for a run…… regardless of the temps.  I would have gone had it been below zero.  Yes, I am  a weirdo like that.  It was also an added bonus to have a little accountability.  Although my running partners were quickly dropping like flies with the falling temps, there was still several who made an appearance.  Me, Suzanne, Kate, & Maggie – Run For Pi(e) 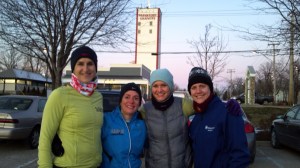 Today we were joining up with the Yankee Runners as they came south, out of  the Palos Hills, to run Old Plank for a change.  When I hit my usual parking area, which is quite desolate at this time of year, I was pleasantly surprised to see it was filled people…..not just people but RUNNERS!  I bet there were 25+ people out there for a run today!  AWESOME.  But I still was slightly tentative about leaving the warmth of my car.

There wasn’t a lot of chatter or introductions, basically we just jumped out of our cars and took off running .  However, I did see Judy F., Frogger, Mark C., Scott B., Cindy T. and a few other people I recognized from Running For Kicks functions or the Park Forest Running & Pancake Club.  Once we were moving, the photos blurred as the lens on my camera phone fogged.  But I still tried!

It was really beautiful out.  We had a dusting of snow, the sun was just coming up and did I mention it was 10 degrees?  The wind was low, we had a headwind going out but coming back I realized I was overdressed  but it was just a beautiful day.  And as always, I was super glad I went out and got in a few miles with my friends.  On a random side note, I want to thank all of you who continue to come out and meet me to run.  It is sooooo much more fun running in a group verses going solo.  Thank YOU!

“Run”way Fashion:  Reebok Compression base layer, long bra top, Athleta long sleeve lined with fleecy flannel which has thumb holes and fold overs for hands (they don’t make it anymore!), then I had a light running jacket on which is a generic off brand I’ve had for years.  On the bottom I had CW-X compression tights plus Athleta Run About Pants in TALL.  I was very bundled without too much bulk, everything fit close so that air didn’t get in to allow the sweat to freeze.  I also wore an ear band, hat, gloves and the new Seirus Innovation face mask (picked it up at Dick’s Sporting Goods last night but couldn’t seem to find it online to link it up here).  So I was really quite toasty after we got running!  You CAN run outside in the winter if you  dress appropriately.

10.03 miles – 1:34, a few stops for photos, a stop for fluids at the 4 mile mark, and a few road crossings but mostly kept it moving.  On days when its this cold, please keep moving so your sweat doesn’t freeze.  That would be bad for your skin.

Leave a Reply to Run with Jess Cancel reply