After running a full cycle in the “new” Saucony Guide 5‘s with the 8 mm heel to toe drop, I feel like I can give an accurate and honest review of the changes of this shoe.  First off, the new Guide’s LOOK really cool, although this is the last thing we are supposed to consider when buying a shoe, let’s be honest, it matters. 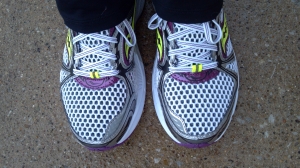 I have been running in Saucony exclusively  since 2006/2007.  Due to my size and forefoot strike, I have to change out my shoes approximately every 300 miles or 3 months.  I really like to get 3 months out of a pair of shoes if possible but that is usually pushing past the 300 mile mark.  So let it suffice to say that I am familiar with the Saucony line, particularly the Ride (Pre-Michael) and the Guide (Post-Michael – Don’t ask how my foot changed so much from having a baby but that’s not the only thing that changed so C’est la vie).

The Guide 5 is by far the most attractive pair of Saucony’s I have ever owned.  It’s actually nice to be sporting a pair of “cool” shoes for once.  🙂  This new version with the 8 mm heel to toe drop is also 1.5 oz lighter.  I know that doesn’t sound like a lot but it is a noticeable difference.  I notice it when they are on my feet and I had both pair in my hands last night and the Guide 5s were considerably lighter than the 4s.

The Guide 5s also fit like a glove.  It was love at first fit for me when I slipped these on my feet.  They are soft, much softer than the previous versions and they feel more airy .  Great fit in the store, great fit on the run!

Although I was initially impressed with all the new changes, these shoes broke down quickly.  And I mean very quickly.  I ran the bottom off these shoes by the time I broke 200 miles and that’s just not cool.  I ordered a new pair from Running For Kicks once I hit 220 miles because my body was telling me it was time to switch them out; however, since the shoe has won so many awards and has a massive ad campaign in progress, it seems the shoe’s popularity has soared!  Therefore, I had to wait 3 weeks for these shoes to come off the backorder and be delivered to the store.  In the interim, I ordered a limited edition of the Guide 5 from another source but have yet to receive those either.  However, here is a peek at these beauty’s which I will be sporting with my girls at 13.1 Miami Beach!  We decided to coordinate with pink & black and these babies will look pretty cool with our color scheme.

So just this week my  backordered Guide 5’s arrived at Running For Kicks.  I immediately picked them up and got to hit the trail with them last night.  I certainly didn’t go far as I have some nagging aches that I need to  evict before the Miami race; however, I was able to catch up with my F’N Runners for a bit.  Good looking group showed up in the rain, if I do say so myself!    From Left Back:  Susan, Cathie, Wayne (newbie!!), Dawn, Kathy, & April.  Left Bottom:  Nicole C, Jeni – Sparkalish Roar, Meg & Nicole W (April’s Daughter!).  Not pictured:  MagMileRunner, Diane & myself.

I ran 4 miles with this crew before bowing out to go home to Motrin & the last remaining sample of the Arctic Ease wrap.  Although the Arctic Ease is not as cold as ice, it is certainly more convenient than icing when you  don’t have time to sit down.  They are temporary though, I had a larger covering that I had purchased at the Chicago Marathon expo and when I went to pull it out, it was moldy.  This has happened with other wraps I have had too.  They don’t last real long but are certainly handy.

As I was  making dinner, I started to think about the difference between the Guide 4’s and 5’s, knowing darn well that the fact that I ran too long in the current pair of Guide 5’s was the reason for my new aches/pains.  This prompted me to dig out my old shoes which I have been using to commute back and forth to work.  Since the Plantar Fasciitis issue, I haven’t worn a real pair of  shoes for quite some time, so I live in my Saucony’s.    The Guide 5’s are on the left, the Guide 4’s on the right.  You can see the wear is so much worse on the 5’s with 285 miles verses the 4’s with 330 miles.

Forefoot of the Guide 5’s:

In my opinion, it is conclusive that the Guide 4 wore much better than the Guide 5.  That being said, I still think the Guide 5 is a better shoe in all aspects but I find it unfortunate that I will be getting even less wear out of the new version that I did previously.  Is it worth it, probably yes but still not good for my bank account.

Do you buy the same shoe each time and know exactly how the updates affect your body? Any shoe you can tell us about that specifically made noticable changes to the good or bad?