This was the first year that 13.1 Chicago fit into my schedule.  I’ve always wanted to run this race and ran the Miami Beach version in 2012 but this hometown race just never worked out until now. 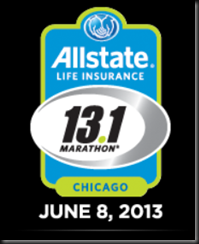 My first impression was not a pleasant one.  Packet pick-up was in Chicago, one location, limited pick-up times, high traffic area, no parking.  I was one “hot” momma by the time I drove around Old Town for 40 minutes with my kiddos, tried to park in a garage that was full, then settled on parking illegally to run in while also dragging my kids and grab the packets for myself and my friends.  Logistical nightmare for the non-Chicago runners.    Fortunately, once inside the pick-up was organized and smooth and I was in and out before Chicago PD towed my car.  The goodie bag was a virtual one to save on paper, but we had to physically pick up our bib & shirt.  The shirt was a Helium brand, gender specific sizing which ran small.  They also gave us a nylon backpack. 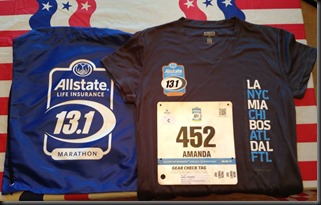 The race itself was at the South Shore Cultural Center on 71st Street on Chicago’s Southside.  Parking was limited and the event offered and highly recommended the free shuttle service for all participants and spectators.  Win!

Pre-race I met up with my fellow FNRC runners and a few Chicago Running Bloggers.  There weren’t many bloggy friends this time around since this event is on the same day as the finish of Ragnar Chicago.  From left:  Emily (Out and About),  Eric (This Hobbit Runs), Chris (My Kind of Run), and myself. 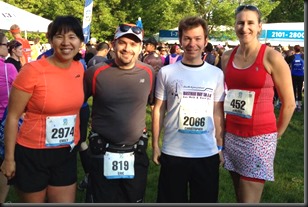 The race started at 7am on the dot, sending off the first of many corrals.  Each corral was separated by about 30 seconds to help crowding on the course.  I was in Corral C and probably should have been back one or two more since I’m not really race ready as of yet.  I wasn’t at all crowded but certainly not running the same speed as my corral mates.  My focus for this race was to be controlled the entire time, not go too fast and not die at the end.  This was basically another training run for me.  I want to be able to run well on tired legs.  The 40 miles I biked on Friday morning pretty much delivered those tired legs and it was my job to run on them and prep for the Racine 70.3 next month.

I anticipated this course being very crowded because the entire race was on either the lakefront path or running/walking paths through Jackson Park.  However, it really wasn’t bad.  Possibly because I was toward the front.  Possibly because I wasn’t trying for any speed record.  Possibly because I was just happy to be there, to be running and enjoying the day.  We had good temps which were in the mid 60s throughout the race.  Then the course was shaded in many spots, thru the park and also on the lakefront path.  The view of the city from the south was breathtaking and the out and back course provided distraction as I watched for my fast friends.  I even had a surprise around mile 5 seeing another bloggy friend, Xaarlin (Pain is Nothing),  who was kind enough to come spectate and take a few photos!  The good part about seeing her on the way out was knowing that she was there on the way back so I was “ready”  when she pulled out the camera. 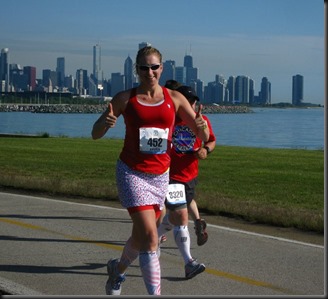 This is a good race.  Great location which is also unique to the Chicago “racing” scene.  Great scenery.  On course entertainment.  Aid stations spaced probably 1.5 miles apart which offered water and a sport drink.  Lots of potties.  Lots of smiling faces from volunteers, fast friends who are in front of you and heading toward the finish, fast friends who start behind you and then pass you (thanks, Eric!) and from those friends behind in the later corrals.  Running to me is a social event.  I don’t listen to music, I listen to what is going on around me.  The more people I see on course, the better the race is for me.  I LOVED 13.1 Chicago and loved high fiving my friends as we passed on the out and back!!

As a side note, the last 5K of a half marathon is always a drag.  If I’m feeling good then this is the time to pick it up and make up some time from dogging it in mile 8 & 9 but normally speaking, I just try not to slip too far like I did at Sunburst and destroy my finish.  However this time, I did something different.  In addition to wearing red, white & blue in honor of some of my F’N Running friends who were running Ragnar with the American “Sweat”hearts, I also went Ragnar style from mile 10-13 and counted my “kills”.  Yep, this is how I stayed focused in an attempt to keep from falling off pace, I counted every person I passed from mile 10 til the finish.  26 people.

Consistent with 13.1 fashion, we finished on the beach.  The after party was in full swing by the time I arrived and the pizza and beer was flowing freely.   Now, that’s my kind of race:  Running, Friends, Beach Party & Beer!

Photo with my ladies who run EVERYWHERE.  You may remember seeing them in my race report last week from Sunburst in South Bend, IN.  Yep, they ran 13.1 Chicago too!  Myself, Carol, Nicole (who ran a 1:38 which was good for a new PR) & Heather. 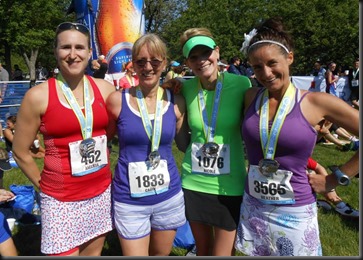 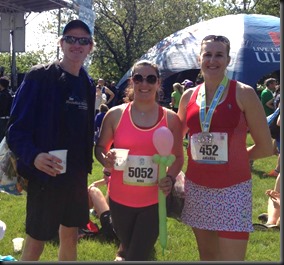 Then my F’N friends were kind enough to march out on the beach with me for a photo in front of the Chicago skyline!  Melissa, Nichole Z, Ken, Nicole F, myself & Maggie. 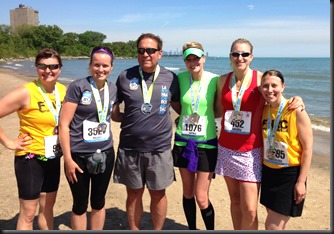 Thumbs up for 13.1 Chicago!  I’d definitely run it again if my schedule cooperated!