The Garmin Marathon in Kansas is in the DONE column.  I’m slowly working my way thru the states.  I have an ongoing, long term goal to run a marathon in every state.  Slowly cuz well, I have a budget and a family.  I have basically given up all other racing, other than marathons (and 70.3 triathlons), in order to put all my $$ toward this goal.  As a result, I try to pick marathons in new states whenever possible.  I’ve also become a frugal traveler to save money and make the quest a bit more manageable.  We pile 3-4 people in the car/hotel room and don’t do much other than eat and run.  Kansas was state #19 and Garmin was my 30th marathon.  To be honest, this feels more like an adventure than a goal and each new state brings new friends and more stories for my golden years.

Kansas.  What do you know about Kansas?  I apparently knew nothing.  I imagined vast areas of grasslands, farm fields and flat terrain.  Like very flat where the wind would blow for days with nothing to stop it.  I was wrong. As I was driving thru Missouri bound for the border town of Olathe, KS, all I could see were hills.  Lots and lots of rolling hills.  I must admit I was slightly distressed.  I normally don’t have a predetermined goal time for marathons.  I normally just run what we can manage.  If we are all having a good day, we run comfortable.  If not, we run, walk, jog at whatever pace we can manage.  No big deal.  We just roll with the punches.  But this time, for the first time in a very long time, I had a goal in mind.  One which honestly, should have been quite manageable.  I was healthy (thanks to Dr. Goins at Optimum Performance in Ft Wayne IN).  I was strong.  I have shed some of the weight I gained almost 2 years ago with our massive move.  Most of all, I was confident that I could hit the numbers.  But the numbers would only compute if the terrain were flat.  I am a poor hill runner.  My body just struggles with the uphill & we have very few inclines in this area on which I can try to improve this weakness.  In fact my Saturday run group has gone out of their way all winter to run up each and every incline we could find, sometimes twice.  But it wasn’t enough.  No PR for me in Kansas.  But I tried and I walked away proud, knowing I didn’t give up before we even got started.  I rolled with the plan, hit the numbers until I could not physically hit the numbers any more.  So there you have it.  No PR in Kansas.

The expo was easy and fast.  A few cutouts of Wizard of Oz characters (See Tamyra, myself & Cindy with the Wicked Witch below).  Several booths but mostly local businesses & events.  The Gypsy Runner booth was definitely the  busiest booth at the expo.  I love her normal stuff but she printed a shirt specific to this Wizard of Oz themed race and it was awesome!  The “Don’t Make me Drop a House on You” burnout tank was quite popular and I was lucky to snag one before they sold out.  Me, Cindy & Julie in our tanks on race morning. (Available here at GypsyRunner.com). 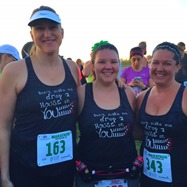 The race shirt was also very popular.  The shirt was gender specific and featured the image of the Wicked Witch with a quote saying “Never Surrender”.  So appropriate, although I didn’t know it at the time.

The Embassy Suites was the host hotel and actually connected to the Olathe Convention Center where the expo was located.  Super easy expo, hotel stay & race start/finish. In fact we didn’t even move our car to go to dinner but rather walked across the street to a nearby venue.  It was a great decision because when we returned, we found that the finish line was already set up.  Had to get a pic all together at the finish!  Erica, Me, Tamyra, Judy, Elina, Cindy, Julie & Eric.  So fun!! 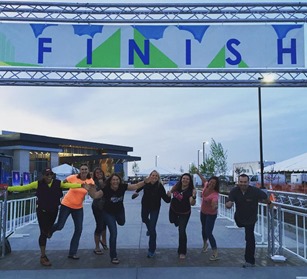 Race morning came and the weather was comfortable, in the mid 50s at the start.  Unlike most race mornings, this one was particularly easy because the start was about 50 feet out the front door of the host hotel.  Nice.  Now, let’s run!  Tamyra, Judy, Me, Cindy, Random Dude & Julie waiting for the start. 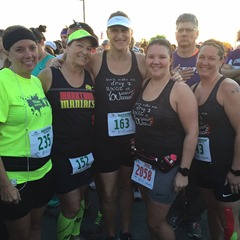 The start was right on time.  The hotel was a top a hill.  Shocker.  As we crossed the start line, the view was a sea of people and a hill in the distance.  Photo credit:  Gypsy Runner.  She was probably shooting the hill ahead but she caught a glimpse of Judy (center in the black maniac tank/yellow visor), Julie is front right of Judy in the black tank & you can barely see my head in front of & above Judy & Julie’s head, I’m in a black tank too.  Love it! 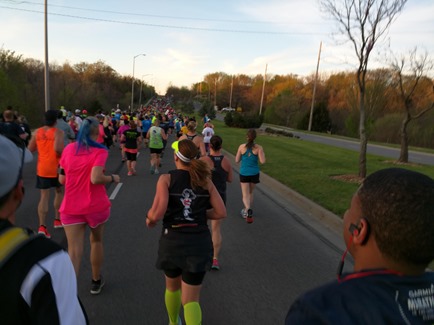 We were hoping to leave the hills behind as we ran away from the hotel but that wasn’t the case.  There wasn’t the usual chatter.  Some talk, but mostly just running.  It was a head down kind of race for me.  I tried to not look at the hills, which resulted in my head being low and on the ground in front of me most of the time.  I was hoping if I didn’t “see” them, then I wouldn’t really process them.  I was also hoping that if I didn’t acknowledge how quickly it was heating up, then that wouldn’t be happening either.  I was in denial, right?

The aid stations were well stocked and spaced about 2 miles apart.  Lots of water, Gatorade, GU & potties.  I also saw several medial tents.  The race was very well ran, lots of volunteers, police and even a lady riding a bike dressed as the Wicked Witch. Photo credit:  Gypsy Runner.

The first half of the marathon course was on the streets of Olathe.  The last half was an out and back on the Mill Creek Trail.  Garmin boasted a new course this year due to the start/finish being moved to the hotel & convention center.  See map below. 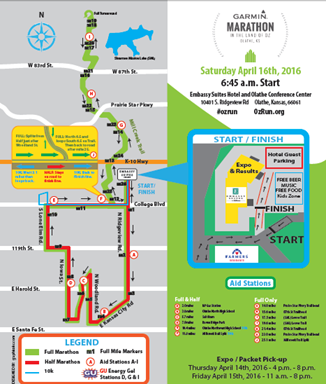 I had high hopes that once we hit the trial, the course would flatten out and cool off as we entered the woods.  It didn’t.  I was getting pretty close to hitting the wall at this point.  I had ignored everything and was able to average between 9:18-9:41 thru the first 14 miles.  Then I hit the wall.  I wasn’t hurting, just didn’t have that pace left in my legs.  I needed to start walking some of the hills.   The Mill Creek Trail was pretty.  We crossed several bridges & creeks and it was a nice area to run.  I would have loved it and ran it frequently if I were a local.  Photo credit:  Gypsy Runner (pic 1) & Tamyra (pic 2).

The temps heated up to the mid 70s during the race but we did have some cloud cover and a breeze toward the end.  Speaking of the end, I was kinda dreading the hill at mile 25.  I knew it was coming because we had to run down it around mile 13.  But I also knew as soon as I could get myself up that hill, I was in the home stretch.  Photo credit:   Gypsy Runner 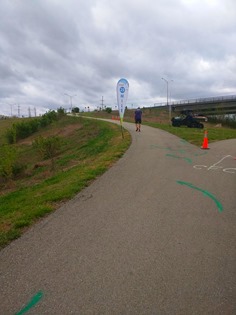 Ah, the finish!  Just follow the Yellow Brick Road!  I’m on the left.  The two other gentlemen, I had met the day before at the original Kansas City Joes while we waited in line for BBQ.  They were on pace to pass me up before the finish but then took pity on me and ran me in since they were “in no hurry”.  LOL!   Photo credit:  SeeKCRun  who in conjunction with the Garmin Marathon allowed free photo downloads!  Nice touch! 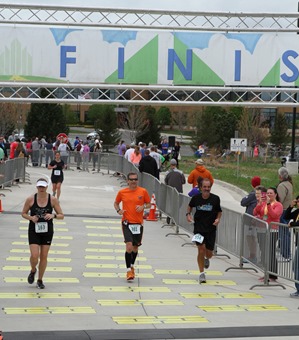 Elevation chart showed 940 feet of climb.  930 of decent.   Not crazy climbing for some but a lot for this Midwesterner.

Very cool medal.  It’s huge and I love the Wicked Witch theme.  There were 588 marathoners who earned this medal!

2037 half marathoners earned a Glenda, the Good Witch medal.  653 runners earned the Hot Air Balloon 10K medal.  Overall, the Garmin Marathon did a great job.  Stayed on theme.  Great support and even a great course.  There was an after party with free beer and several booths, lots of massage & chiro people to help stretch out the runners.  And the best part, upon completion, I walked straight into the hotel for a hot shower and my recovery drink.  Nice!

That’s a wrap  for Kansas!  Next up is a double marathon weekend with the Kentucky Derby Marathon on 4/30, then the Flying Pig Marathon on 5/1.  THEN I move into a fun filled summer of Triathlon.  I can’t wait!

Happy Running, whether its up hill or down, just keep smiling!