It was rainy earlier today but Mother Nature knew you needed some photos and that I didn’t want to ruin my new phone in the rain so she was kind to me!  As with all lunchtime runs, I got ready in our ladies washroom.  Apparently I need a blogger-bathroom-photos 101 course cuz these photos were the best I could get. 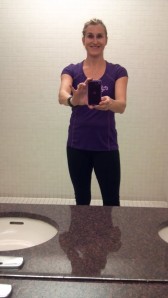 I hit the street for a dash to the lakefront path. On days like this I actually enjoy working downtown and being able to run at lunch when I just can’t get it done at home.  The chore of getting to/from the lakefront is probably harder than the actual running.  I spend a good deal of time weaving around the pedestrians, waiting at traffic lights and then finally I hit the lakefront at Monroe Harbor after crossing Lake Shore Drive (LSD).   The first glimpse of the lake and the sun attempting to peak out is refreshing. 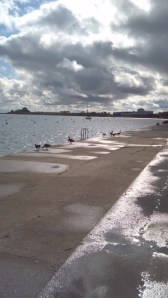 I frequently head South toward McCormick Place because:  1)  It’s a less traveled route, most runners and tourists head North toward Navy Pier, Oak Street Beach, North Beach, etc.;   2)  The path is slightly off the water so if the weather is less than ideal, there is a bit of a shield between runner, water & elements;  3)  McCormick Place has a bathroom right off the path; and,  4)  Portions of the trail have a soft shoulder for the injury prone .

As I hit the Museum Campus, still in Monroe Harbor territory, I noticed two “ship wrecked” vessels.  Remember last week when I planned to run the lakefront but ran Yankee Woods in the ‘burbs instead?   Well, it was because portions of the lakefront path were closed due to 25+ foot waves.   About a month ago when we had waves “almost” that high nobody realized they should stay away from the water and several runners/bikers got swept into the lake.  This time officials closed the path  and apparently it was a good move…..these sail boats were destroyed by the waves.

Moving on into the tunnel under the drive to Museum Campus. 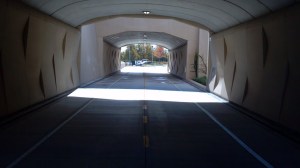 Coming out of tunnel….STUNNING view!

This is about a mile from McCormick, if I run to McCormick it’s a 6 mile trip, if I want 8, I go a little further.  I took a lot of photos in the beginning and then put the phone away to make up some time.  The last photo stop was actually on the return and I had to stop, climb up off the path and onto the lawn at the Shedd Aquarium to grab a crystal clear pic of the Chicago Skyline.  Now that’s priceless!

8.01 miles – 1:14:19 –  several street crossings to/from lake front, lots of photo stops and even stopped to take a photo of a group of tourists on their camera so everyone could get into the shot.  GREAT day to get out and run!