Last month, Mel from Running For Kicks asked me if I would be the next “Spotlight Runner” for the store.  I was, of course, honored to be chosen.  They just started choosing Spotlight Runners this year and I was excited to be part of it!  As we all know, I’m a huge fan of Running For Kicks “the store”, Mel the owner, and the employees who are always around when we need them. Hey, Gail!  No revolving door in this retail establishment but real people who know  YOUR name and actually care about YOUR feet and running performance!  Read more on my respect for Running For Kicks HERE.

Mel sent me a list of questions and asked me to answer them for the Spotlight board.  Of course, I wasn’t brief, just not my nature, and they had to cut my answers for the actual “board”.

I would have posted this much sooner but had been hoping to get into the store for a photo with “the” board.  Due to my injury, I told Mel to put those Saucony Fastwitch 5s back on the shelf and I didn’t get in until this week when Aby needed shoes (she’s a Mizuno girl). 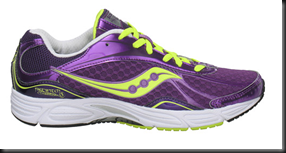 So Aby and I stood beside the board for a photo!

Since I know that nobody probably had time to stop and read the question/answers, I’ll post them below.  It’s easy to see why editing was necessary!  🙂

This is quite possibly more than any of you wanted to know about me but there it is in black & white.  And if you haven’t stopped into Running For Kicks lately, go back and check them out.  They rock and they actually care about you.  Mel, even sent me a note asking how my injury was doing.  How many running store owners do you know who would do that?  Thanks, Mel for always being concerned about me and  Aby, how we feel and the way we run!