The registration period for the 2013 Team Tough Chik is NOW open!

You may have seen me announce this on my facebook page last week but I wanted to do an official post.  The registration period is only open through October 29th so don’t put it off too long or you will have to wait for another year to be part of this amazing community of active women!

As I await the influx of new “Toughies”, I look back on this year and recall how Team Tough Chik has supported me unconditionally thru the ups and downs of what came to be for 2012.  I did spend a lot of time in Team gear but it was mostly on the bike since my run was put on hold  for several months due to injury.

Aby and I first raced in the Team Tough Chik singlets at the Devils Dash in Peotone in May.  Here were are with my friend Nicki (who will be on Team Tough Chik for 2013!!) and Michael, then a couple of “on the run” photos.

Then I got hurt and spent a considerable amount of time cycling:

And some time teaming up with Aby for a bit of duathlon action:

And some time doing 2/3 of triathlon races for which I was already registered: 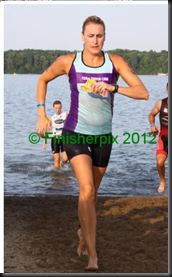 When I originally heard about Team Tough Chik, I had never even purchased one Tough Chik item but I was intrigued with the all women team concept and being part of something a bit bigger than my local community.  I truly wanted to be part of an international team of amazing women.  Then when I heard that Tough Chik was lining up sponsors and all of the team members would be getting a “mystery” package, along with their Team gear, which would include samples, full size products, and a year’s worth of discounts for not only Tough Chik but also ALL OF OUR SPONSORS, I was hooked.  They had me at “mystery” package.  I took the gamble and immediately signed up for the team and it has been an amazing experience.

What did the sign-up entail?  I had to purchase a Team gear package.  The least expensive package was for the running singlet only and it was very reasonably priced.  It will be the same this year.  If you want to be “part” of the team, you may purchase any of the packages HERE, and they start at $25 and go up to and include the “Whole Enchilada”.  The least expensive (running singlet only) package also includes 5% off of all regular Tough Chik gear for a full year, plus the random goodies & discounts from our new sponsors.   Cool, huh?  And most importantly, we once again have a kick ass awesome design.  Here is a peak at the 2013 TRI kit:

Check out today’s Tough Chik blog HERE for a few words from myself, Susan, Karen and Tonia  as to what Team Tough Chik has meant to us for 2012.  Hope to see you on the 2013 Team!