Yesterday as Chicagoland was getting its first real snowfall of the year, many were out enjoying themselves and PLAYING in the snow.  I didn’t get much of a chance to have fun but I really did enjoy my walk to the train! 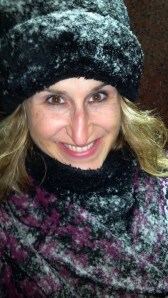 Let’s check out some of the AWESOME things which the TooTallFritz readers have been doing with their Snow Day!  By the way, I’m super envious and want to be out there with each of you!

Thursday is a normal “run day” for a few members of the F’N Running Club.  Here is Julie, Jeni H. & Don all suited up for their run.  When they hit the trail at noon on Thursday, they were kicking around 3″ of fluffy powder!  They really kicked it around too for 6.5 miles!  Great job!   Please notice Jeni H.’s Shakeology shirt.  Both her and Don are Beach Body reps for Shakeology, P-90X, Turbo Jam and all that fun stuff you may have heard about at the gym.  If interested in Shakeology, please contact Jeni HERE. 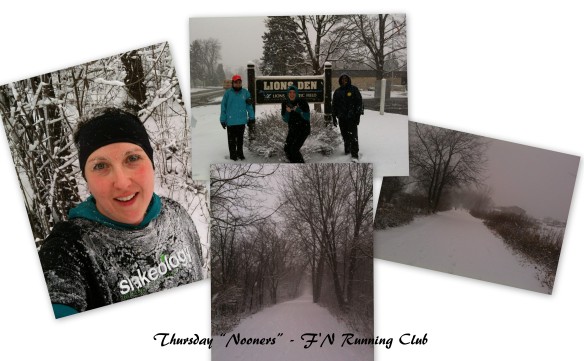 Run with Jess was also able to sneak out for a windy 3 miler in the snow.  She looks warm and toasty in that awesome jacket!  I love that you “pop” against the snow, way to pull double duty being cute & safe!  Please get to know Jess, she is one of my Ragnar Relay teammates!  Whoooooop! 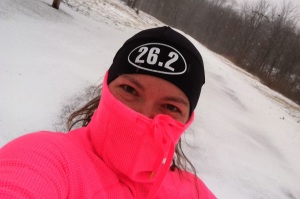 Aurelia, a new member of the F’N Running Club, was also out enjoying the weather.  She and her favorite running partner, Maggie, hit the trail at Yankee Woods for a nice, quiet 4 miler!  Lookin’ good, Maggie! 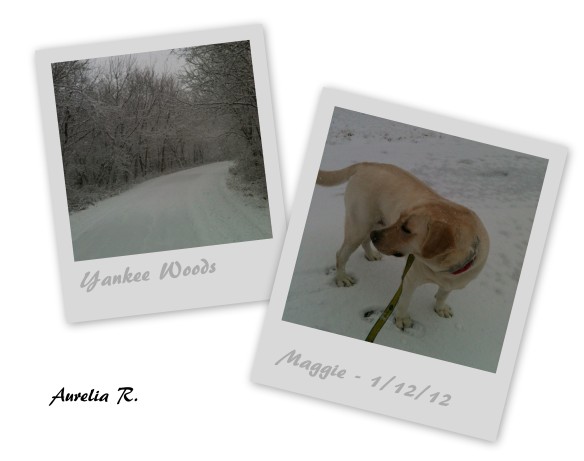 I had hoped for a REAL snow day today but Mother Nature only brought us a couple of inches down here along with some blowing and drifting snow to make driving a nuisance in the early morning.  However Kelly stayed in today and made homemade protein bars!  Check out Kelly’s blog for the recipe!  I must say that I am impressed.  Great job, Kelly! 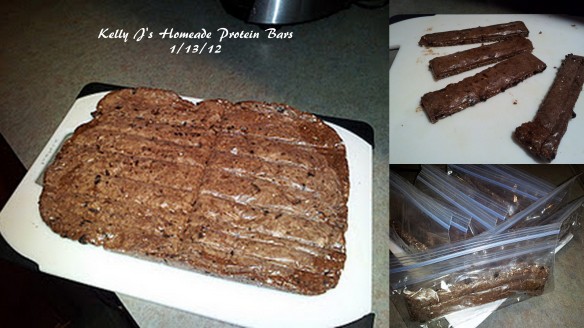 I was super excited to see that newbie runner April was out pounding the trail for a couple of miles today.  You know it’s a great run when you finish and you have frost on your gloves/hat and frozen eyelashes/eyebrows.  April is actually sporting new winter wear  from a recent shopping trip.  You look great April and will fit in well with all of us crazy runners.  Happy have you on board, and you are going to KILL that half in July.  Gett’m Girl! 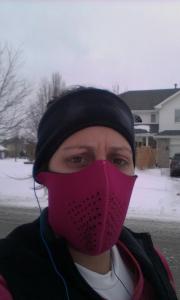 I also managed to get in a run today.  It was windy out here in the country and although the roads are plowed, we still have some drifting issues.  So it was slow going but great to be out slipping and sliding .  I ran 5.07 in 51:24 with lots of stops for photos, text messages (trying to make sure my lil man was getting a ride home), and I stepped off the road at least 15x to let cars pass.  It was getting dark toward the end of the run, snowing lightly, roads were a mess and let’s just say I wasn’t taking any chances.  So off into the snow I stepped for each and every car.  I’m not  a fan of road running at night.  I much prefer braving the coyotes in the early mornings where I can avoid most traffic. 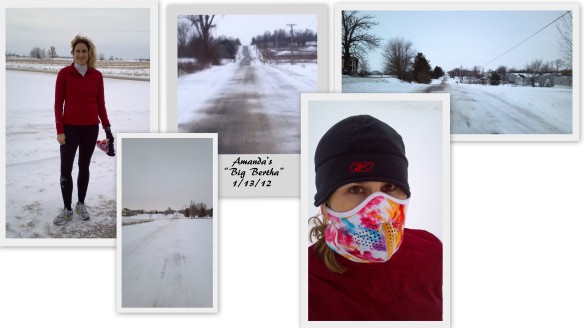 How do you spend your time when the weather turns?  Are you hunkered down inside by a blazing fire, sipping hot cocoa, skiing down a radical mountain, or making snow angels with the kiddos?  Tell us!

There’s a new race in town and since I don’t have  time to run them all, I was thankful that I had an “eye” at the race in a runner named Diane F. (& Company) from the Frankfort Running Club.   This was an inaugural race so there wasn’t much press on it, in fact, I haven’t even heard much about it in the days post-race.  The Perfect 10 did start and finish at one of Chicago’s most family friendly attractions, Navy Pier, so I’m very interested to see how it went .  Thanks to Diane F. for taking the time to compile this report and send some photos .

It was a PERFECT day and race.  We thoroughly enjoyed ourselves and would definitely do it again and recommend it to anyone else.

Awesome job, Diane F.!  Thanks for taking the time to articulate your thoughts on the very first Chicago Perfect 10!  If I may read between the lines, it sounds like you had a great race, had fun with your friends, Perfect 10 had a good start and did lots of things right but possibly has a  few kinks to work out for next year. I advise ALL race directors to bring on the food or go to Indiana to see how races feed people post-race.  Runners like to eat, in fact most run to eat.

Anyone else run the Perfect 10 this weekend?  Share your thoughts with us in the comments section! 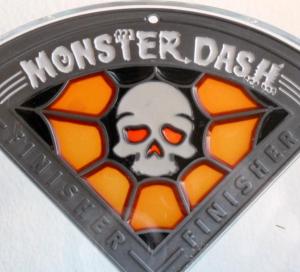 I have heard many mixed reviews on the Monster Dash in Chicago.  Some people have made comments about loving it and loving the course while others absolutely thought it was one of the most poorly run races in the CHI.  I have never personally ran the race as it is always on Halloween Weekend and my mommy/family duties always trump any other weekend plans.  Since I couldn’t personally run, I put out a request to my friends at the Frankfort Running Club for a Guest Review of the race.  They had a rather large group of runners who had been excitedly planning for the day for the last several weeks and I had hoped that somebody would help me out.  The following photos and review are from Susan D. of the Frankfort Running Club.  Thanks so much Susan for helping me out; I really appreciate it!

What could make for a better Saturday morning than waking up before dawn—after an anxious night of sleep — to take the 6:14 train into Chicago for the Monster Dash?  Hoping on the train with a motley crew of runners was the perfect way to start my weekend.  Our group consisted of both beginning and veteran runners, some as young as 6th grade (one of my former third grade students!) some as old as, well…me.  A few of us were doing the Monster Dash Half Marathon, and others were doing the 5K.  And yes, there were costumes involved.  I proudly rode the train with a keg of beer (costume of course, although there was some real beer involved!), as well as a tube of Preparation H, otherwise known as “The Official Ass Cream.”  I myself was not brave enough to wear a costume, but I was much inspired by the creativity of others! 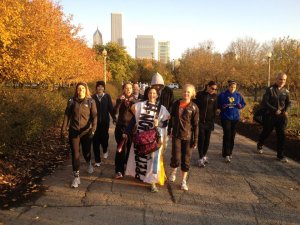 Once we arrived in Chicago, it was a short walk to Grant Park, but a long, cold wait for the run to begin.  Along the way, we got several strange looks and many “thumbs up” for the tube of ass cream roaming the streets with us.  I was feeling a little lame that I showed up in a running skirt and Halloween shirt.  Plus the people wearing costumes looked warm and cozy!

When the run finally started, those of us doing the half marathon were separated from the 5K group.   The first few miles are always tedious.  Why do people get in the 9:00 pace group when they are going to start walking right in front of you at mile two?  So after some weaving and zigzagging, we were finally able to hit a rhythm at mile three.

Now this course wasn’t really flat and smooth.  There were a fair share of potholes, puddles, grassy surfaces, and inclines that we had to overcome, but three of us who trained together managed to stay together for the entire run.  During our practice runs, we kept a steady conversation, but not today.  There were a few sentences – maybe a few swear words – uttered here and there, but the focus was on…well, staying focused.  And it was getting warm.  Suddenly my Halloween t-shirt didn’t seem so lame.  Those costumes that looked so snuggly now looked suffocating.

At the 7 mile turnaround (good God, was it ever going to arrive?), the Ferris wheel at Navy Pier looked so far away.  By mile 10, I was starting to think about a tall frosty beer.  And I don’t really drink.  Costume watching kept me occupied for a while.  I could admire the creativity of the “Hooter Girls”/Guys that were running in front of me, but then I started to get angry that two guys in tight orange shorts both had a better butt than me.  So I worked up enough anger to pass them.

The home stretch wasn’t too bad, and it was fun to be greeted at the finish by our friends who ran the 5K.  But wait…how come they got trick-or-treat candy at their water stops and we didn’t? 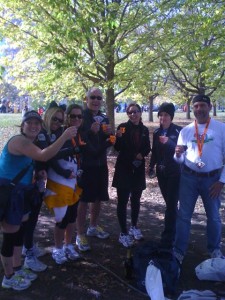 We decided to catch a later train home and refuel at Kitty O’Shays.  The train ride home was filled with fun stories and new friendships, and nothing can beat that on a Saturday morning that started out dreary and dark, but ended up crisp and sunny.  And when I finally got home, I didn’t care how much they hurt my feet, but I put on my high heeled boots and went out to celebrate with a night on the town.  But ouch…my feet sure did hurt on Sunday morning!

TooTallFritz Readers – Please post your own experiences on the Monster in the comments section!  I’d  love to hear your thoughts as well! 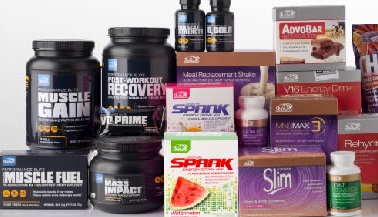 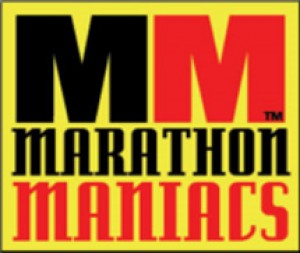