After the trail marathon in CT, we headed over to Narragansett, RI to run the Ocean State Rhode Marathon on Sunday, October 25th.  It was a short 50 minute trip, which made this a great double without too much driving between venues.  Since we had walked/hiked a majority of the CT race, we were hoping for a great day in Rhode Island!

It was dark by the time we arrived in Narragansett so we didn’t see the town, just checked into the hotel, ate, prepped for the race & went to bed.  We woke with the sun to the sound of waves crashing.  That’s always a good start to the day.  It was cool and crisp in the low 40s and a perfect day for running! 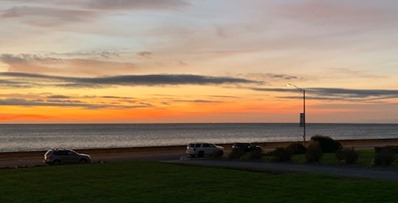 We were less than 2 miles from the start/finish.  Quick trip along the ocean to the Narragansett Town Beach.  Even though it was cool, there were quite a few surfer’s out trying to catch some early morning waves.  Now that seemed crazy!

This was one of the first races to occur in Rhode Island since the pandemic started. The organizers worked hard to provide a safe atmosphere for everyone.  This included some new precautions including:  shortened packet pick up windows, no race day packet pickup, staggered start times for each race, limited participants, no bag check, no stretching/warm ups by the start area, as well as the mandated masks at the start/finish & aid stations.  They also asked all runners to carry their own hydration in an attempt to limit or minimize the use of aid stations, and then cut down the number of aid stations available on course.

Julie & I masked up and were ready to stand on our respective “dots”.  The road was marked with red dots that were separated in each direction by 6 feet.  Very easy, just stand on a dot and get ready to run! 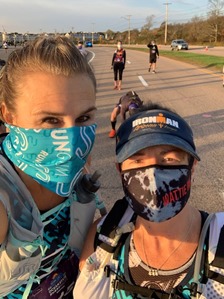 They asked that we keep our masks on until the runners spread out from the start area.  We were happy to oblige and most other runners did great and ran with their mask until the crowd started to thin.

The first 10K of the course was the most scenic.  We did not run thru the town of Narrangansett but we had ocean views, and that’s a win! 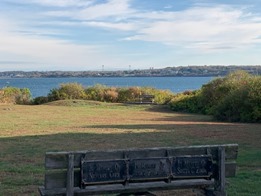 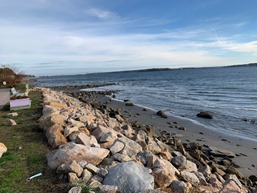 Even as we turned away from the water, the course was still great.  We did run along some busier highways but had plenty of room to run and the overall condition of the roads was impressive.  Where I’m from, the roads are not smooth, or flat, so this was noticeable.  Especially since my feet felt pulverized from the rocks of the Pachaug Trail, the day previous.  Lots of great neighborhoods, and then long scenic roads.  A lot of the course had out & back sections, so we saw the runners in front and behind us.  Everyone was super friendly, runners, aid station volunteers & the police that were helping direct traffic & keep runners safe. Rhode Island, you were impressive! 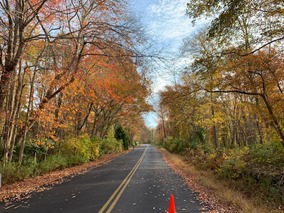 But all good things must come to an end and well, I was ready to be finished! 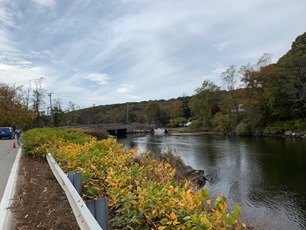 We ran from Narragansett, to Bonnet Shores which was definitely the most scenic area.  Then to Saunderstown, North Kingstown which was the “turnaround” point.  Back thru Annaquatucket, past the Narrow River & to the finish at Narragansett Town Beach.

Great course.  Great race.  I’d definitely go back to do this one again!  Thanks to the organizers of the Rhode Races & Events.   We know this wasn’t easy getting this approved and letting us run thru several areas/towns.  But we appreciate it and would definitely come back to run and hang out when Covid is a long and distant memory.  Thank you!

SWAG – Buff, anyone?  And the medal is a tribute to the local Narragansett Indian Tribe which inhabited this area long before it was known as Rhode Island. 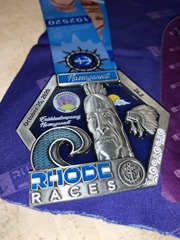 Rhode Island was my 35th state & 59th marathon.  Getting closer to that 50 state goal!